I started this blanket in the middle of April. It is inspired by Andrea's jewel blanket and I used the same basic pattern.

As I progressed I changed my mind about a few things. Out went the red and gold and in came purple. I abandoned the idea of a single coloured background, instead I used some of the different shades of blue and green which had appeared already in the circles. I was intending to use this blanket in the living room and on the green sofa in particular so hoped these changes would help the blanket fit in better with an exisiting colour scheme.

I wanted to join the squares as I went so I modified the fourth round to allow me to do this, this gave the spider web effect in the last round which I decided I rather liked.

As you can see, the blanket has turned out completely different to Andrea's. This is one of the things I love about crochet - how two people using the same basic pattern can produce such individual end results. And thanks to the internet (specifically blogs, ravelry and flickr) it is so easy to see and share these lovely creations. 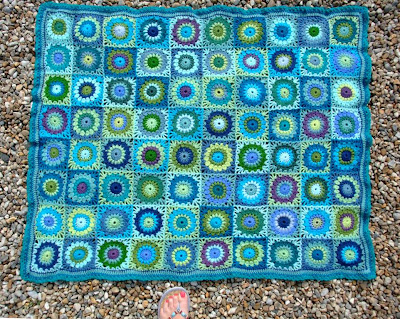 ...TaDa! A balancing on one foot whole blanket on the ground photo. 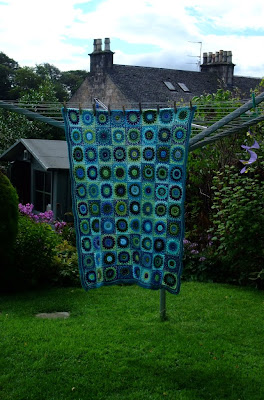 Taking photos whilst it was hung on the whirlygig seemed a good idea. 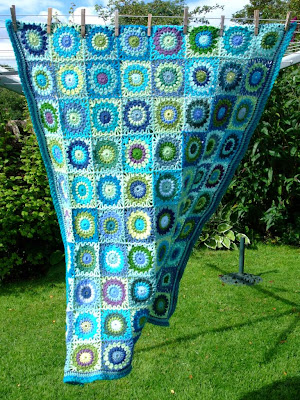 However, it was a little windy. 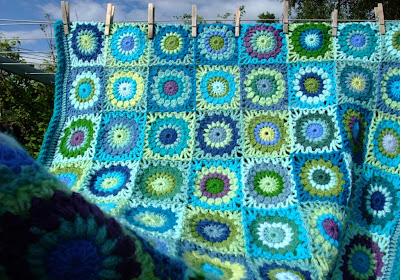 Holding a corner with one hand to keep it steady. 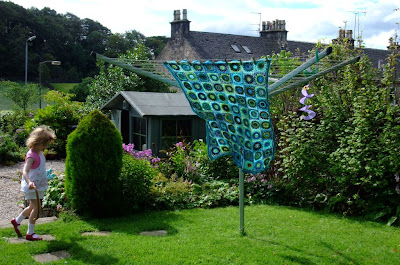 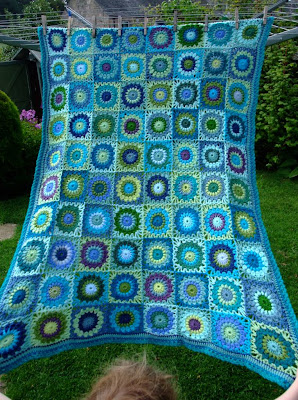 Assistant #1 helpfully grabs both corners, thanks. 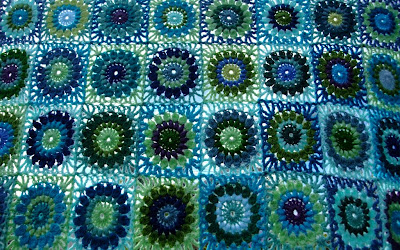 On the bench with Pilchard. 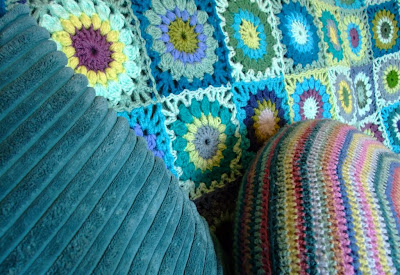 Now we're inside and it's carefully positioned on the sofa. 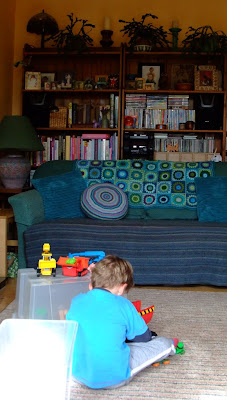 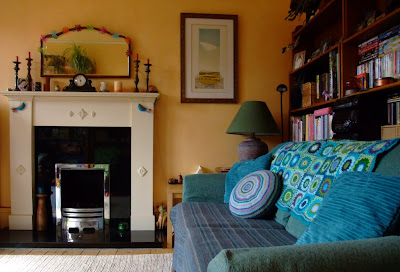 Yes, I'm rather pleased with it.

- Almost all of the yarn was left over from my African Flower blanket, and it just any old DK so long as I like the colour. Mostly it's balls of acrylic from the pound shop.
- If anyone wants details of the fourth round I can add this info later (whille I might still remember what I did!)
- The border is very simple, just a row of (UK)dc, a row of (UK)trc and then two rows of chain loops.
- It was N who named it the Turtle Blanket as he liked crawling around on the floor with it on his back and thought it made him look like a turtle.
- Incase you're wondering what happened to the African Flower blanket, I was never really happy with it in the living room, it was too big and too colourful. However, it looks perfect on A's bed and so will be used there once the weather's cold enough (a little thing to look forward to when summer comes to an end)

So incredibly beautiful I just love those colours! x

Lovely! It looks great in your living room too. I bet it will be a favorite to curl up with.

two bones and a bagle said...

Your blanket is gorgeous - I really like the way you have joined using the 'spiders web'. Well done you - I can't believe you got all those delicious colours in the pound shop either. I normally see flourescent pink/lime etc.

Simply gorgeous!!! I love the colours!

I LOVE it! Wow.... I could look at many pictures of this blanket -so thanks for posting. I am going to look at the african flower blanket now.

Very pretty and it looks perfect on your sofa. :-)

Oh wow it is gorgeous! Love the colours and yes very interested in the forth row if you can find the time. Definitely a blanket I want to do in the future. x

Wow it is beautiful! It goes perfectly in your livingroom. I wish I could crochet.

I love the colours of this blanket- I'm a real turquoise and blues kind of girl, so this is my kind of blanket.
One more for the 'to do' list, methinks.
Xx

That is one of the most gorgeous blankets I have ever seen. Truly a thing of beauty xx

Your blanket is stunningly beautiful!!!
I love the colours- and the design, so so pretty!!!!!!!

Beautiful :-) I think you were right to go with this colour scheme, the blue/green/purple combo is stunning!

What a beautiful blanket, the colours are just gorgeous. You should be so very proud.
Anne xx

That is just gorgeous - love the spideryness!
Sandra x

Beautiful colour combination, and I love the sense of movement that the block arrangement gives.

Soothing and cheerful at the same time. It looks lovely in your living room.

P.S. The word verification for this comment is "laeweel". A very Scottish-sounding concoction, and, come to think of it, what your blanket does on the sofa. It laes weel. :)

Wow - it is so beautiful! What an incredible amount of work! Absolutely stunning.

It is beautiful and vibrant!

your blanket is goreous Anne, such beautiful colours - great photos too x

Ooooh I need your email sweetie!! Anyway I will attempt a short reply on here but if you need further details then email me. You can buy kits of certain things but the design I did was from a chart and then you buy the threads separately. I can get some stuff from UK shops but I also buy from USA as well as they have nice stuff. I got the chart for the Polar Bear from Sew and So a UK online shop. There are places to get threads from which are cheaper than Hobbycraft etc as their prices are so high. I am not sure of your knowledge in this area but maybe if you have never done it before your best bet would be to buy one of the magazines available which have free kits on them. Let me know if you need anything further. xx

It has turned out beautifully, love the colours you chose.

What a beautiful quilt. The colours are gorgeous and i love the detail on the edge of each square.

It's totally gorgeous, I love the colours and the 'spider web' final round. I always think, yes, yes I'm so going to learn to crochet when I see posts like this. Very inspiring. Bethx

I love your job, it is amazing!!!
I need the details of the fourth round please!!!!
my email marta_aglez@hotmail.com

Would you please send me the pattern? I did not find it when I was looking at the website. I would like to make the blanket for a friend.

I know this was done a few years ago but could you please tell me how you did the fourth round if you remember? Thank you so much!!