OK, I'm about to reveal my tablet recipe. Such things are not done lightly! In the past, when asked for the recipe I've been rather coy - I wanted to be the only one who could make such yummy tablet!

If you don't have a sweet tooth though you won't like it! When you measure out the ingredients you will appreciate just how unhealthy it's going to be, I remember being quite shocked in that respect the first time I made it. Also, it is quite a buttery soft tablet so if that's not the way you like it then it's not for you either! But I like it best out of the many that I have tried over the years.

It's known in our family as "Mum's Tablet" my Dad also having a recipe he uses but which I'm not quite as keen on. At Christmas my Mum and Dad used to make a batch of tablet each plus my Mum would also make fudge (not to mention all the mince pies, cakes, biscuits, etc - no wonder I and my three brothers all love sweet things!) 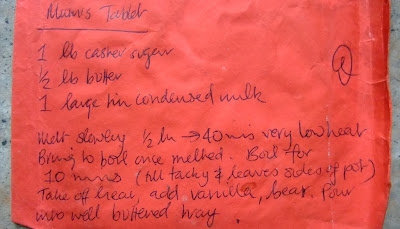 Above is the recipe as I use it. If you've made table before this is probably all you need. If this is your first tablet experience then I've taken a few photos and have explained the steps in a little more detail below...

Equipment
Large pan (the mixture expands by 2x or so when boiling)
Wooden spoon.
Tray, size 7"x11" or equivalent, greased. 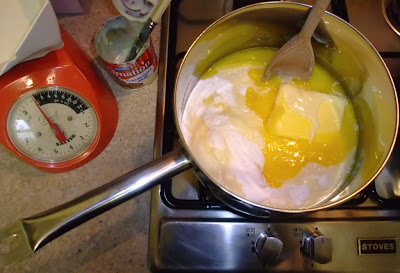 Put the sugar, butter and condensed milk in a large pan and melt them together over as low a heat as possible. Give the mixture the occasional stir, especially towards the later stages as it can burn easily. If you've been a little lax in your stirring efforts and some brown lumps start appearing I've found you can break them up by stirring vigorously with a whisk. 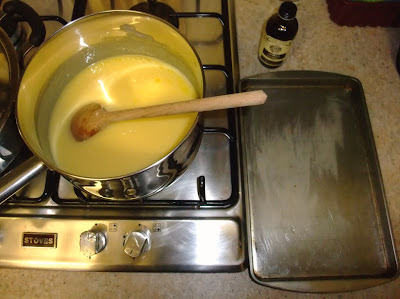 Once it's all melted it's time to bring it to the boil. I transfer it over to a larger ring for this and turn the heat up a little. Before starting this stage make sure you have your vanilla extract and greased tray ready! 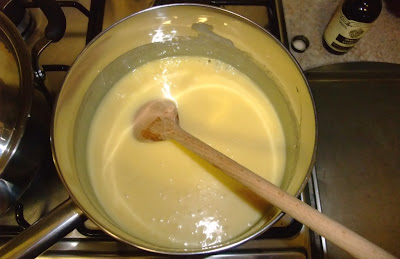 Keep stirring! After about 5-10 minutes small bubbles start to appear - the tablet is starting to boil. Definitely do not stop stirring now! From when the bubbles start appearing and until the tablet is ready takes approximately 10 minutes, but this can vary a little so it helps to know what to look for when it's ready to pour... 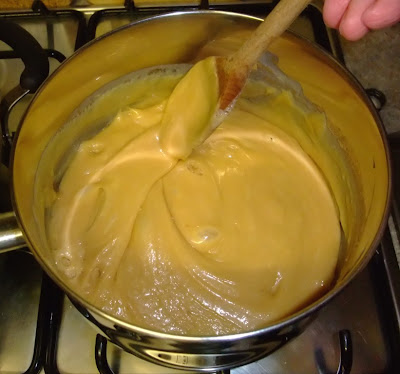 After about 10 minutes of boiling it will have darkened in colour and thickened in consistency... 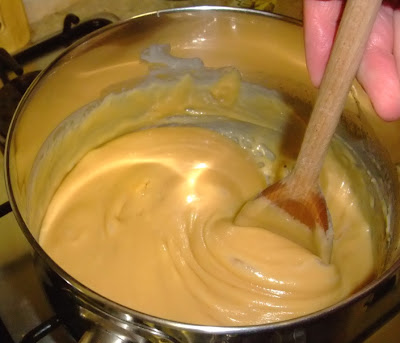 ... and the tacky mixture will leave the sides of the pan.

5. Remove from the heat, add a dash of vanilla extract (approx 1/2 tsp) and beat the mixture... 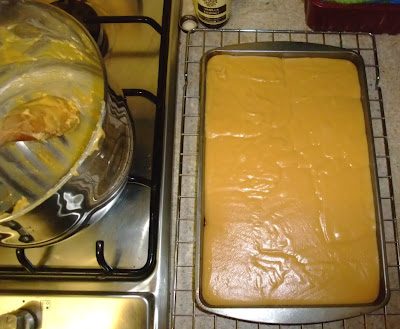 ... before pouring into the prepared tray.

It's best to undercook than overcook. If it's underdone you can always put it all back in the pan and boil it again for a few minutes (which is what I had to do here and though it actually ended up a little overdone it wasn't a disaster), if it's too overdone there's not really anything you can do about it. 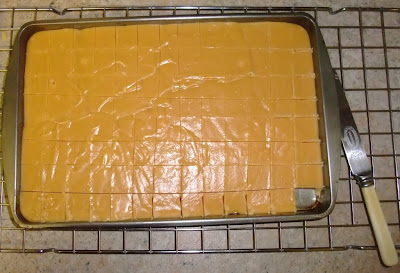 Allow to cool for a few hours before cutting into squares. I find it best not to leave it sitting in the tray too long otherwise it seems to absorb the taste of the metal, so I remove it as soon as it's cool. 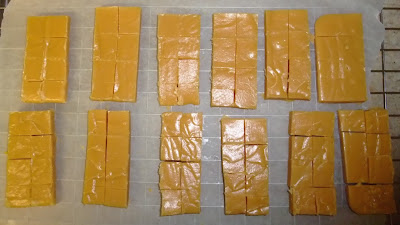 You'd be ill if you tried to eat it all yourself! Best to give some away, this batch was made to sell at A's nursery fair. I did make sure that there were an odd number of columns so that one column of squares would be left over for sampling just to make sure it tasted OK you understand!

Mmmmmmm! Talking of secret tablet recipes, anyone remember this?
Posted by andamento at 14:05

These look delish..... Not sure what we would call them here. Nevre heard them call TABLET... but I like it. Sound less sinful than White Fudge....he-he...

Can I bring the coffee.

Thank you for the secret tablet recipe. It looks exactly like tablet should. I will have a go at it on a day when I'm feeling strong in the arm department. But also - thank you for the "Dunk" clip! I grinned like a daftie through the whole thing. Pure class. Victor and Barry. Oldies but goodies.

So generous of you to publish the secret recipe. Little bags of tablet will make pretty gifts, obviously you wouldn't want to eat it all yourself, or would you?

I came back to your site today because I had forgotten to say how much I like your retro orange scales. Then I noticed the new header. Is that the trees on the mound you pass on your bike rides? Looks very effective, although I am a bit sad to say goodbye to the cow.

It looks a bit like what I would call fudge - is it similar? I love your comment about making yourself ill by eating it all! Did you ever try?!

You are very brave to share your secret recipe!
I'm actually drooling here! Never heard of tablet before but judging by the ingredients it must be divine. I could try it if I knew how many kilograms a lb is :) I can look it up, I guess!
Love the new banner and miss your bike rides!

I so want to try this but my teeth hurt reading the ingredients! It is the festive season after all and that means I can eat what I like - right? I will be making use of the rowing machine once C starts pre-school in jan anyway so why not. Thanks for sharing the recipe. Bx

Thanks a bunch Anne.Shall give it a go in early January and post a few pics of it on a hill somewhere.
I presume it has been tested on humans with no harmful side efects ?
Alex :)