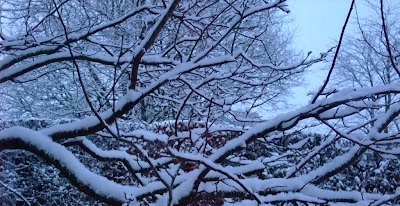 One of the songs A sang at her nursery show (on the theme of Christmas around the world) was Kling Glockchen Klingeling. I looked it up on YouTube, as you do, and came across this version by Marianne and Michael. I have to say that I find it absolutely fascintating and have watched it so many times though can't quite understand why! Is it the costumes, the naff musical arrangement, what they're doing with their hands, the audience... it led me on a YouTube journey following Marianne & Michael - what an enjoyable waste of time that was!

A's show was on the 16th Dec which was when the "worst cold I've ever had" started. Since then I've not been able to taste or smell anything which is perhaps just as well as it means I can't taste the yucky green stuff I am exuding - I've never experienced so much snot/phlegm during a cold! To top it all, we all succumbed to a vomiting bug the weekend before Christmas - N managed to cover his bedroom floor and A the sofa (we had to cancel the big family get together we'd planned for the Sunday). Then I developed sinusitus. Today I'm now finally feeling human again though still unable to small or taste and also my ears are now blocked. Thankfully the sinusitus seems to have cleared up as although I'm still bunged up it's no longer painful. Ahhh woe is me! Not a Christmas I'd like to repeat. We've had lots of lovely snow but I can't wait for it to go as I hate the horrible cold damp air that comes with it - just sets my coughing off again.

I've pretty much been hibernating over the Christmas period. Hubby kindly did the Christmas food shop. I'd put crackers on the list as it's not Christmas without crackers, except he bought biscuit crackers! There was also no fresh poultry left so he bough a frozen turkey which is fine except we left it out in the snow as we didn't have any room in the fridge/freezer and didn't read the label till the morning of Christmas eve when we realised it took 48 hrs to defrost. Fortunately he was able to get back to the shops & buy some proper crackers and a ham. We've still the trukey in the freezer - I'm looking forward to eating it once my sense of taste returns.

His family have a big "do" on boxing day where we all take something to eat. I didn't go this year but I had made a key lime pie when I was feeling better which I'd frozen. Hubby took it and the children along. It was in a springform tin. He didn't know that you had to support the base when you released the spring...

Hope you're having a better Christmas than we are!

Well, I'm thinking you win the competition for the worst Christmas. Sorry to hear about all the sickness and the cracker comment made me laugh! It's exactly what my other half would do.

Hope it improves soon and you have a much improved start to the New Year followed by a fabulous year!

Oh dear - what a sorry tale you tell!! Husbands!! are sooooo from another planet. Hope you have a better "New Year"

Now the New Year has arrived I hope you are feeling much better and starting to celebrate a little. I wish you health and happiness for 2010.

Poor old you Anne. What a tale of woe for Christmas. I hope you and the family are all feeling better now. Your poor hubby - they are so inept sometimes it is sweet...bless. I wish you a great 2010 to make up for it...haha.