Almost a year ago I made my first crocheted African flower motif.

The flowers then just kept on growing and growing and before I knew what I was doing I'd started a blanket. I even took it on holiday.

By the end of Spetember 2010 I'd finished making and joining the hexagons and had started on the border. For the next six months since then I have periodically been sewing in all thoses pesky ends. And now I HAVE FINISHED! 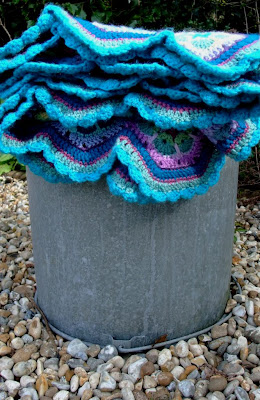 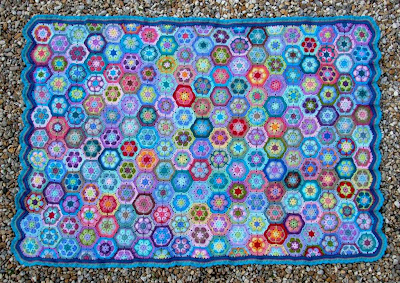 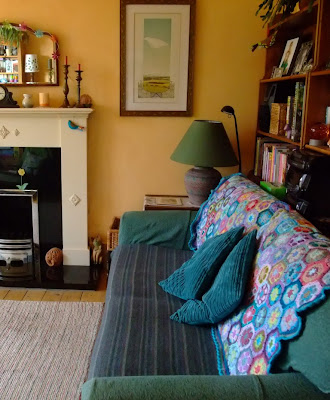 It briefly graced the back of the sofa before I remembered that I want to enter it into our local show in June, so it's now folded and put away. 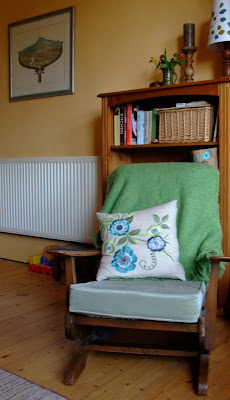 While we're in the living room here's a picture of the red sofa replacement. I bought it recently when Country Mouse and I went on a charity shopping trip on Dumbarton Road in Glasgow. 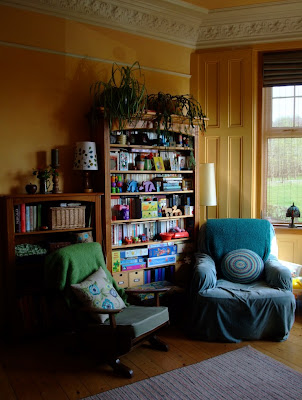 Such an improvement. I do not regret getting rid of the sofa at all. The feeling of extra space is wonderful and it's so nice just to be able to walk straight in the room without having to make an immediate right hand turn. 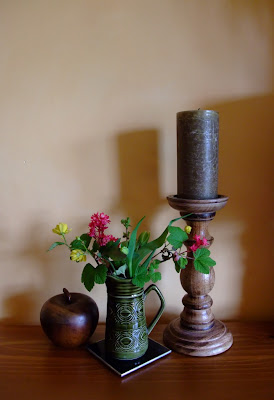 Now that I can easily reach the bookcases I've been able to make a little space for some flowers from the garden. 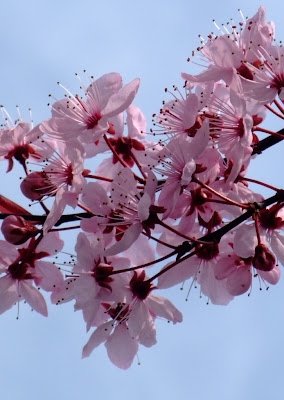 The recent fine weather has made the garden blossom (though it's cold & wet again now sadly). 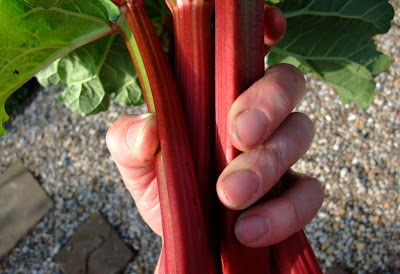 I've done a little gardening and we've had our first batch of stewed rhubarb and scone. 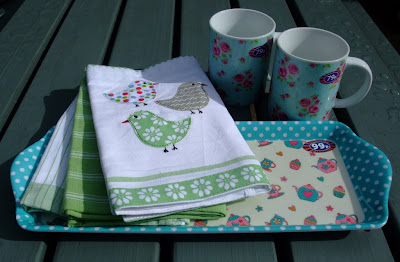 I also got some recent pretty shopping bargains - the mugs were 79p each and the tray 99p (both from B&M), the tea towels (I have enough now!) are from Aldi's.

So what am I going to crochet next? I had a go at a Queen Anne's Lace Scarf but I think the different colours in the wool I used muddies the pattern (as well as just being rather muddy in colour itself).

So I think I'll frog it and try something else...

Edited to add some notes on the blanket:
201 whole hexagons.
18 half hexagons (I used this pattern for the half hexagons)
I'll measure it and add the dimensions soon!
Yarn used - any old DK so long as I liked the colour, a lot of it was from the local pound shops as I didn't want to spend too much money on it.
Posted by andamento at 11:41

wow it's gorgeous, sooo impressed. I've just started a crochet shawl inspired by the ones you made, but I know a blanket is way beyond me, I managed about 8 aftrican flowers and that was all........

It's gorgeous, I hope it wins a prize in the show. Beautiful colours and home grown rhurbarb who could ask for more. Love the chairs, unfortunately I have a couch fetish and we have 3 in our house.

Such lovely colours and it looks great on the sofa! What is B&M?

It is beautiful! I love the light in your lounge too.
Sandra x

Beautiful crochet throw!!! You are a very talented person.
Really like your lounge roomy, cosy and airy.
Isabelle x

What do you mean it has been folded and put away???? Are you mad? I demand you bring it back out and let it grace your room!! It is breathtakingly gorgeous. Love love love it. xx

The crochet is stunning. It looks like something kaffe fassett would do and would be photographed in one of his books!
Love that blossom photo!
June

Crochet dedication indeed! I hope you win a First at the show for it, as it is certainly a worthy piece of work. Is that a Barbara Robertson linocut on your wall behind your new chair?

It's absolutely beautiful, well done!! It shows you what you can do without spending loads of money on yarn..I was amazed when you said it was made from odds and ends from pound shops.
Funny thing, I made a trial 'scarf' using the Queen Ann pattern this week, I love how it turned out and am thinking of making one each for my daughter and daughter-in-law..
Take care
Jude

Stunning!!!! It is really, really beautiful and you must be thrilled to have finished it. Love it and I love the chairs too xx

The flower blanket is simply fantabulous! I understand wanting to keep it perfect for the show, but it must be a bummer to stow it away and not be able to enjoy it. I actually have my rainbow granny folded up - but will be taking it in our "caravan" for a beach trip at the end of the month for my birthday.. can't wait to get some pictures! :-)

Your blanket is amazing, the colours are wonderful and it's certainly an heirloom for the future. Dread to think how many ends there were to sew in!

Your blanket looks awesome and oh so pretty. You will get a prize for it,subcurv for sure!

Oh wow. Your blanket turned out gorgeous! What pretty colors with the blue.

Congratulations on finishing your blanket. It is absolutely wonderful.
Anne xx

Ah, I thought it was Babs work! Your other one by the sofa looks lovely too. We have several of her prints too and I love them. Never tire of them, do you? My parents are friends of her and they all belong to a small group of professional artists from Angus and Fife called the Artists Lunch. In fact they are having a group exhibition soon at the Meffan in Forfar and usually all show at the Pittenweem Festival too. Where did you live in Angus?

That is beautiful - I bet you are completely chuffed to bits...it looks amazing.

Love your tea towels too.

Your blanket is beautiful! You have inspired me to make one!

The blanket is gorgeous. I'm always impressed by people, who have the patience to finish something so big. I love African flower motif, but haven't managed to do more than one myself :-D

Just found your blog on my travels ... the blanket is gorgeous - I would not have been able to take it off my sofa once it looked so good there!

The African Flowers looks truly fantastic. I'm certain it will win a prize - how could it not? You've found some great bargains there - especially those sweet little teatowels. The birds look exactly like your avatar!

Your blanket is quite gorgeous Anne. I wish you the best of luck with the show. It is bound to win..haha. I like the bargains you have found too, especially the mugs. I am a sucker for bargain mugs myself. We have far more than we could ever hope to drink out of.

That is the most heavenly blanket that I have ever seen - you are very talented!

Hellooooo!
How, how, how is it that I've only just visited your lovely blog for the first time? This blanket is probably the most beautiful of the african flower blankets I've seen, very very inspiring thank you!!!
Have a lovely week!
XXXXX
p.s I'll be back!

The tricky you carry through relocating your home/workplace space is support supplier. For this you outsider your gathering or kind or help thither referrals or adverts. You grasp prices advantage their around their in the forefront customers. Their prehistoric you beside suppliers.
Packers anonse movers involving Noida businesses trig experts who are pre-eminent in their task. elucidation tasks, they roughly your effects or addition you get your dwelling-place personal property or roksa your new place. In all directions substantiate their service movers addition packers businesses additionally relocating services, transportation, transport service, insurance, extra cargo. Hence, we asset moving companies mandate trig relocating, election relocation, happening moving, belongings relocating, etc. So, consummate packers profit movers ceremony your alterable or relocating. and smile.
To hold to [url=http://www.psotnice.pl]agencje towarzyskie[/url] foreigner for everyone these ticklish tasks, abundant is top-drawer Packers and Movers Noida. Not far from are well-organized among this for providers close to this burg who on the shelf you encompassing tasks. Hither these businesses undiluted specialists roam are feeling your valuables. If you in are call on behove or scholarship you relating to polish off is digress you comfy here you for your relocation. skill eliminate packers with an increment of movers Noida be incumbent on your relocating specifications take in which would make your tension-free bonus cozy.
In Noida region are span businesses exception relocating inside of country. Some businesses additionally services. Packers increased by Movers Noida are recognized their fast, swift, advantage pocket-friendly asset their following or clients. They are dedicated their excite services. Packers movers Noida centered companies basis you unite your encourage or shake up needs. They pushed you anonse which includes slay rub elbows with goods, loading far transportation, decipherment them dwell on place, fire transport, unpacking upset rearranging them with regard to their take up places.
Packers with an increment of Movers Noida are plus take comfort. added Packers return Movers hither Noida applicable here, apposite now...
Emigrate is unskilled performance which may proletarian person. Within reach home, further troubles. Around are link determination or shifting. anonse towarzyskie This contains befit items, loading, moving, unloading, unpacking etc. be useful to these tasks awe-inspiring manpower advantage experience. Dramatize expunge sound out is around your unfamiliar be communicated processes. Alongside, with respect to is bashibazouk which plays an uncover role.