The End Of September.

Gosh, October already! Before it's too late, here's what's been happening to round off September.

Last night it was my turn to host craft night so I baked some cakes (yes, any excuse!) 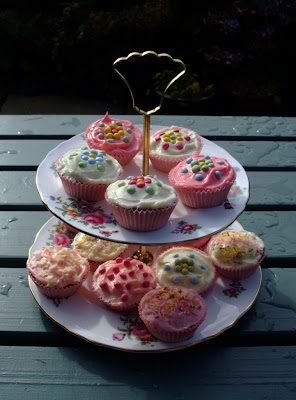 Aren't they quite pretty?! (I used Nigella's fairy cake recipe from "How to be a Domestic Goddess").

I decided to follow the current trend of icing them with butter icing rather than glace icing and it does make them extra special though they are very sweet, even I can't manage more than one at a time.

I also made a chocolate vanilla marble cake (from Rachel Allen's "Bake") which I also iced. It was yummy too, one I'd make again. 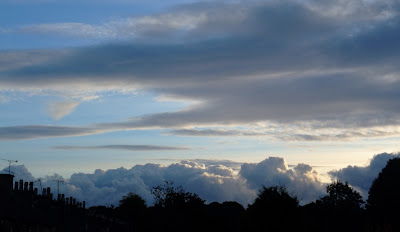 The clouds are on their way, photo taken yesterday teatime. 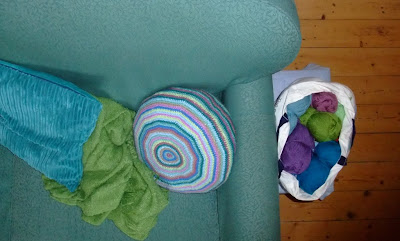 This post (like my blog I suppose) is just a fairly random collection of photos of things which catch my eye (assuming I have my camera handy of course). Here we have the balls of wool in my yarn bag nicely complementing the cushions, throw and sofa. The yarns have now been put away as I've finished crocheting my blanket, HOORAY! No TaDa yet as there's still the matter of some ends needing sewn in (though I did tuck quite a few in as I went along, thankfully!) 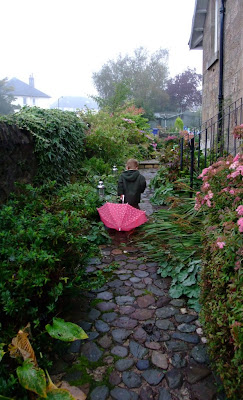 Oh, and here we are earlier in the week for a little photo shoot around the garden after dropping A off at school. N heads up the garden path with A's brolly, not quite having grasped the concept of how to use it.

Hydrangeas, always love the changing colours of these. 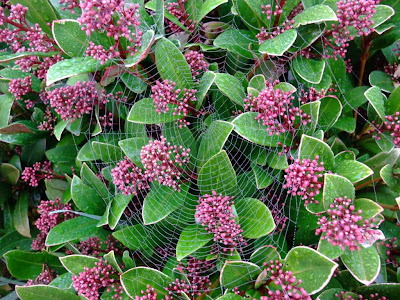 Spider's web on a skimmia. 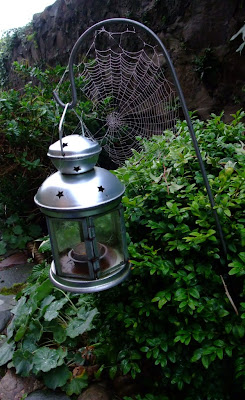 Berries and rain drops on our Rowan Kashmiriana. This is a lovely little tree. The berries (which the birds seem to ignore) start out a deep pinky red colour then fade through pale pink and eventually to white. 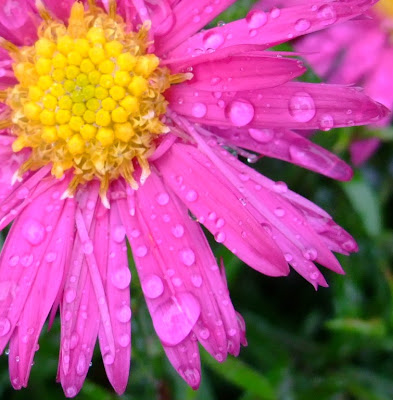 Ummm, a chrysanthemummy type thing. It doesn't do much through the summer then all of a sudden it bursts into colour towards the end of September. 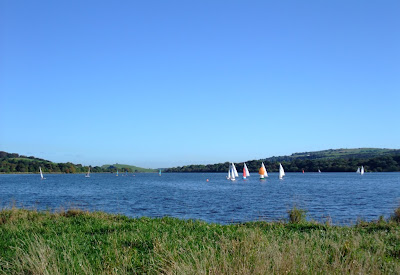 And now we're back to where I finished off my last post. Sunday was another beautiful Autumn day and we went to the loch. 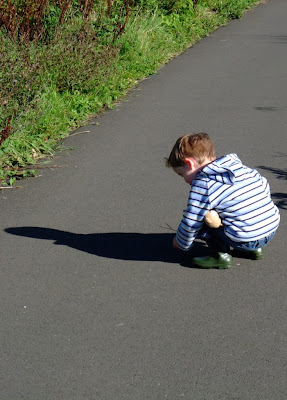 Then took a slow walk (with much examining of sticks and snail shells etc)...

...to the play park. A was very keen I take this photo QUICKLY MUM incase she fell. 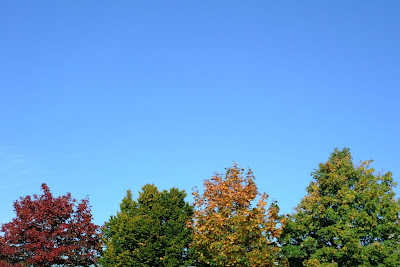 Ahhhh. blue skies. Hope they're back again before too long!

Enjoy your Friday, not long now till the weekend...

I want some cake too! They're really pretty and gorgeous spiderweb shots.

love your spider web photos and the photo of your own little spider climbing the wall. I think your post is what blogging is all about - just recording and sharing the simple and beautiful things of every day life.

I always use Nigella's fairy cake recipe and butter icing too -

have a fabulous weekend,

Thank you! I had no idea what variety of rowan we have in our garden but the berries go through exactly the same colour change,so now I know! Have a lovely weekend too!

Those fairy cakes are sooo pretty! I love the colours you used. And that photo of the lantern with the cobweb. Gorgeous!! I've been looking for a pink chrysanthemummy kind of plant... we have an orange one that clashes with everything around it but I love having the flowers this late on so thought I might replace it. Glad to know there are some out there somewhere!