My first attempt at a crochet creation continues... 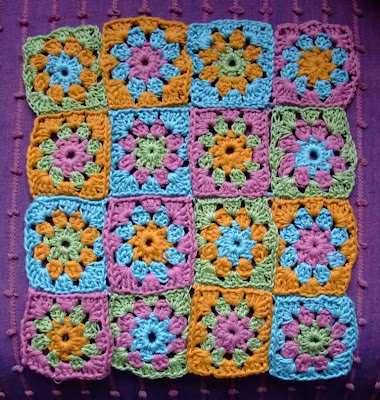 ... Using Lucy's summer garden granny squares pattern I had crocheted enough squares for a 4x4 cushion cover as I had originally set out to do. However, once I started to crochet them together I realised it was going to be a cushion cover for a very small cushion!

I considered just crocheting a wide border, but in the end decided to go ahead with making up the other 9 squares required for a 5x5 cushion. 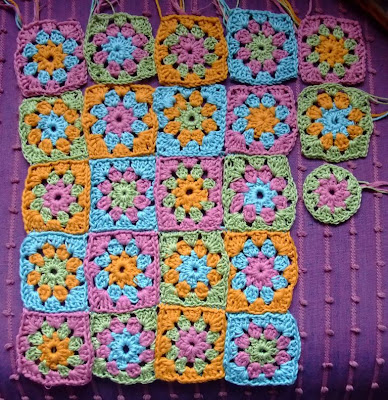 I'm more than halfway through them, and will not run out of yarn as I had at first feared. 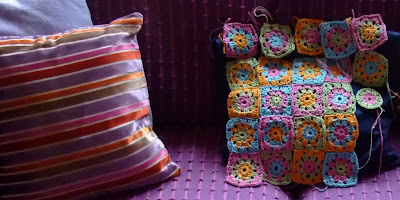 I should manage to get it finished before the end of the year!

Remember the flowers in the first photo on this post? 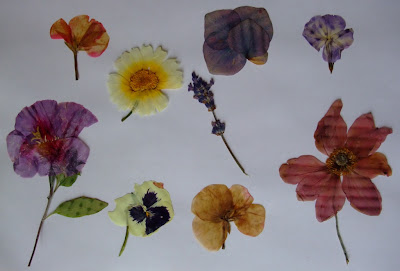 This is them now, well flattened and dried out. A used them to make a card to send to Granny. 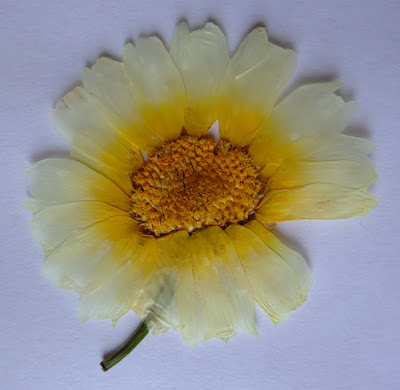 This daisy flower was my favourite and I rather fancied keeping it for myself, but Granny was to get all the flowers on her card. I will just need to be more organised next year and squash more of the garden into the flower press (but will not be using corrugated cardboard in the press again though, didn't really like the stripey effect!). 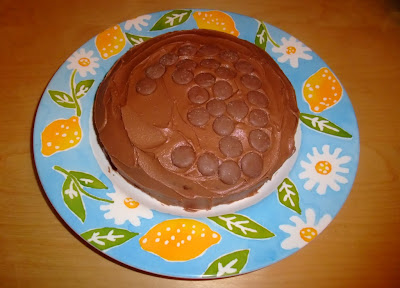 Also during the week I made this egg-free chocolate cake. I'd seen this post on Tabiboo's blog linking to the recipe. She did all the work testing various recipes and this one came out tops, I have to say it was indeed rather tasty. Next time I'll have a go at Tabibbo's recomended icing (didn't have the ingredients to hand at the time) 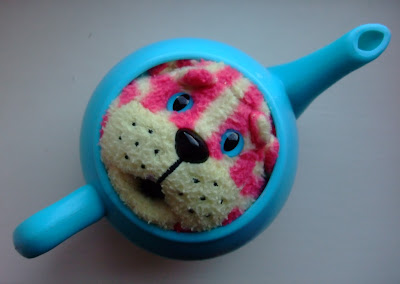 Another random image from the week. A's cuddly toys were playing hide and seek, Bagpuss looks a little squashed in his hiding place.

This afternoon I sold these two 60x15cm mirrors from my website. I apologise for the poor photos, they're old ones and the weather was too awful today to make it worthwhile taking any new ones. My "shop" is now rather bare, must get on with making (and listing!) new items. 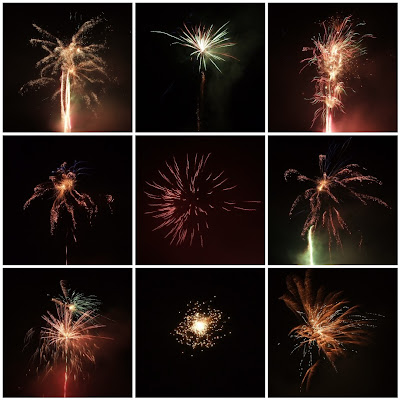 This evening I took A to our local fireworks display and tried out the fireworks setting on my camera. A then told me on the walk home that not only were the fireworks too loud but they were too bright and so she had her eyes closed most of the time! 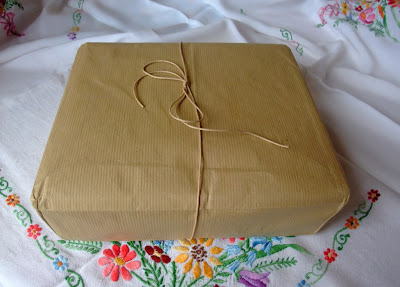 And finally, a little glimpse of a special parcel I received earlier in the week. It's my PIF gift from Diane at HeartShaped, but I'm not letting you see what's inside till my next post! (It won't be a Bike Trip post as hubby will be doing some overtime this weekend which means I'm on swimming lesson duty instead; I'll miss my bike & pics, even if no one else does!)
Posted by andamento at 22:39

I have crochet envy. Love the photo of bagpuss in the teapot, at least A's not hiding beads up her nose!!!

oh dear, I will definitely miss your bike ride photos, but the fireworks photos are amazing and do go some way towards making up for it! i love your cushion (and the velvet ribbon one beside it). Bagpuss does indeed look a bit squashed, but how picturesque! We are planning to go to our local fireworks tonight so I will be checking that Little R has her eyes open!

Fab first attempt at a Lucy. You are doing wonderful. Great color choices. Love on the couch with pillow. Keep it up and please show us when completed.

I'll miss your bike ride too. I used to press loads of flowers - its something I had forgotten about - I'll have to give it a go. Where on earth do you buy blotting paper these days? xxxxx

Love that crochet - well done! And I have a similar opinion of fireworks - best through glass in my opinion!

What a fantastic parcel Anne and how exciting to receive such lovely gifts. I am very confused by the way because I thought I was on the wrong blog. I couldn't see any bike ride scenery...haha. Love how this crochet is progressing. Beautiful colours.