I've been shopping and baking again...

Earlier this week we went to Ikea. Although we are fortunate to have lots of lovely countryside on our doorstep we're also not far from Glasgow and it's many amenities so we have the best of both worlds (just a shame about the weather!). Ikea is only about 10 miles away.

I've had my eye on the birdie tray having spotted it in various other blogs but it was out of stock last time I visited Ikea. This week I was in luck. 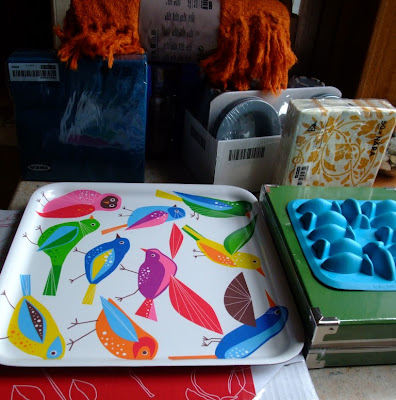 A few other things managed to find their way into the trolley; napkins and storage boxes and an orange throw to brighten up the purple sofa (hmmm, sounds hideous). I also bought a set of cups and saucers for serving warmed Winter Pimms. I'm having friends round on Saturday night and the plan is to eat lots of cakes and try out some Pimms #3, the brandy based version (as opposed to the gin based Pimms #1). It dounds delicious; we'll be having it mixed with apple juice and warmed and served with apple slices. Apparently it also tastes good cold with ginger beer too, mmm!

I've been busy baking in preparation. Last night I made a chocolate fudge cake... 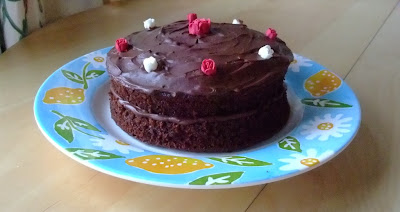 ...it's a new recipe for me and uses a tin of Nestles caramel (dolce latte) so it will be interesting to see what it tastess like. Normally I make the fudge cake from Nigella Bites but this one seemed more straightforward though not as generous with the icing quantities. 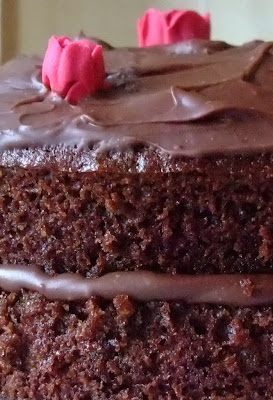 I've also made some tablet. A few pieces of this have already been eaten, if you've got a sweet tooth it's quite irresistable until you reach the stage where you start to feel rather ill! 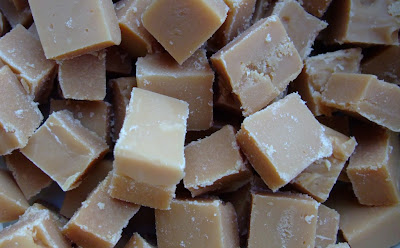 I have promised to post the recipe I use for tablet and will do so soon. I didn't have my camera handy when I was making it and it's useful to see what it looks like in the pan when it's ready. I'll be making at least two more lots before Christmas (not all for us to eat I hasten to add!)

In addition, I've made some iced ginger bread and chocolate caramel shortbread. Both are Nigella recipes and I've made them before so I know I like them. The chocolate caramel shortbread is safely stored in the freezer and the gingerbread is maturing nicely in a sealed food bag on the dresser! I made the icing a little to runny so it's not very photogenic, this is as close as you'll see it for now! 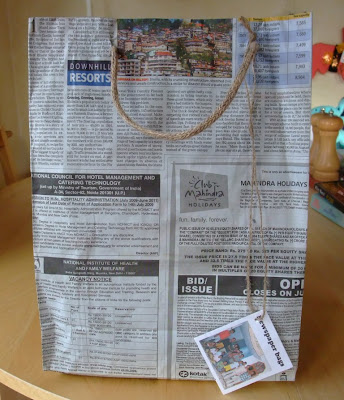 I picked up my TraidCraft order from the nursery when I dropped A off this afternoon. It came in this attractive bag made from newspaper. 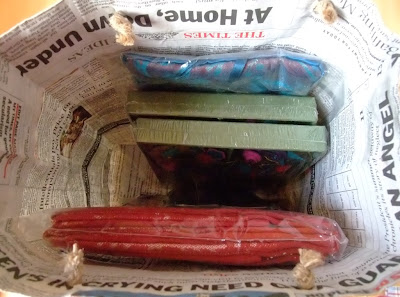 Inside are more Chirtmas gifts... 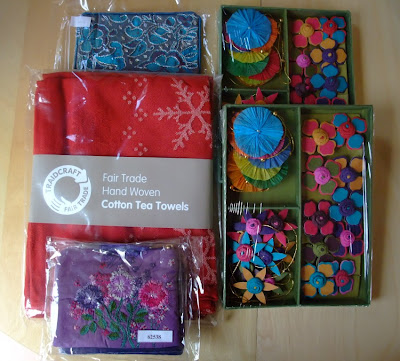 ... though I will be keeping at least one of the paper garland sets for myself.

Prior to nursery I actually took some things to the charity shop. I am trying to de-clutter at the moment, although I did buy a few more things while I was there; a green woolly jumper for felting, two books, a little wicker shelf and a jug. One of the books is by Hilary Mantel who I've been interested to read since she won the Booker prize, I confess to never having heard of her before then. The shelf is alreday up on the wall in the kitchen and the jug is already in the new pile of things to take to the charity shop - I decided I didn't really like it after all but fortunately it was only 75p

I'm rather nosey when it comes to other people's houses and like it when I get a peek of other bloggers' homes. Our home is too untidy for me to feel comfortable to show too much of it at the moment. However, half of the bedroom didn't look too bad... 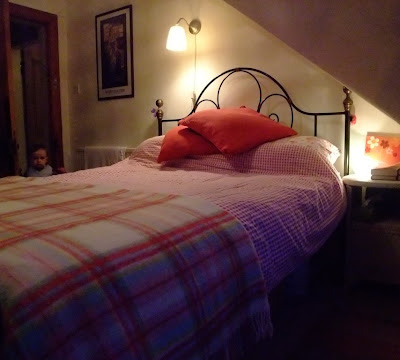 Can you see the little face in the doorway... 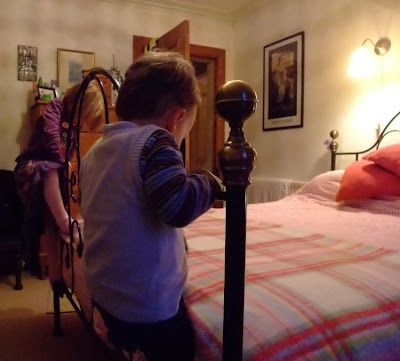 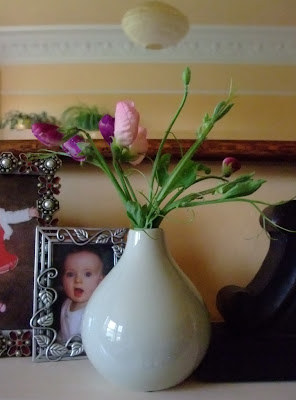 And finally... some sweet peas rescued from the garden before yesterday's storms. It's rather nice to have sweet peas in November!

By the way, I apologise for the quality of the photos, the lighting at this time of year being a little gloomy. I bought the camera I have because it was supposed to take good photos in poor lighting situations, I'm not convinced.
Posted by andamento at 14:27

Love that tray - I had it in my hand to buy last Ikea trip but decided against it - am regretting it now I see yours! That Pimms drink sounds gorgeous! G

What lucky friends you have to be invited to your beautiful home to scoff all that delicious baking!
country mouse xx

I hardly dare tell you that I don't like tablet. I'm probably fortunate in not having a sweet tooth, and my tablet is so sweet. I could be tempted by a piece of chocolate cake though, followed by a lie down on your cosy bed.

The chocolate cake looks absolutely delicious! Is tablet a version of fudge? I know what you mean about eating it and then suddenly feeling sick as it hits the sides! Your camera seems to do pretty well in the November gloom - I just have a simple pocket number and it is hopeless in poor light.

How delicious does that cake look!!! I too went to Ikea at the beginning of the week but didnt buy anything as exciting as that lovely tray - demolished a bag of "Mini Dime 's " though!! xxxx

Still awaiting the tablet recipe Anne.We need some winter sustenance on the hills and pretty quick too going by todays weather :)
Alex.