Grrrrr! Just had a few rather frustrating days though not for any particular reason other than the general inability to "get things done" that comes with having a 1 year old and a 4 year old around.

Above are flowers from the garden that A picked so that we could press them in the flowerpress she unearthed while untidying her room earlier. Sounds like a pleasant task but I'm afraid I was rather grumpy about it all. Anyway, the flowers are now being well squished so we'll see how they end up. I managed to grab some flowers from the garden too for my little jug. It was indeed a grab, I had to remove a little boy from round my leg and run out then back in before he got too upset. They're just plonked in the jug (recent boot sale buy!) and put on my new shelves which are the only part of the house I seem to be able to keep tidy.

I did get out to play last night though. Orchestra practise has resumed. A friend at orchestra gave N a belated first birthday present which was this book

N's not really too interested yet, but A and I enjoyed it, it's great fun. I particularly liked it because... 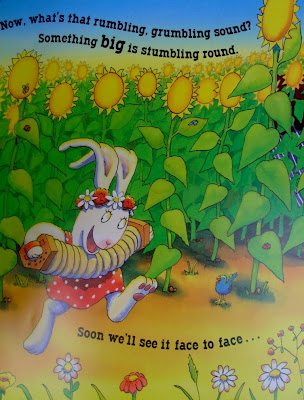 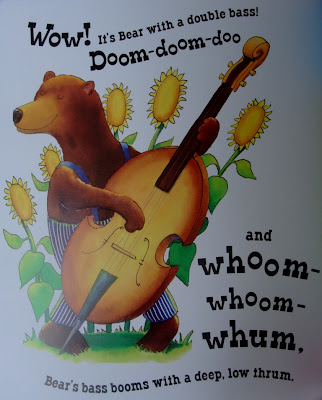 ... it has a double bass playing bear, yeah!

I actually took my bass out its case today though have yet to practise but did take some photos of its bits: 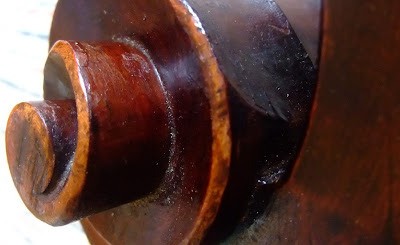 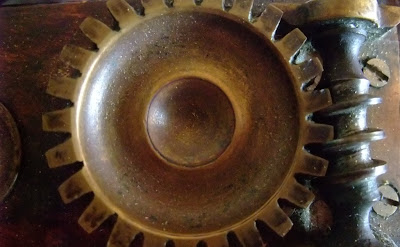 Nice to be back playing. We bass players are a fairly rare breed. I do recomend it as an instrument; it's rare that we get the tune (very!) and we're often taken for granted but there's just something about being able to produce those lovely low notes, mmm!

Urban Gardener by Elspeth Thomson. It was a charity shop buy. I enjoyed it so much I bought this:
from Amazon marketplace, which is the sequel, A Tale Of Two Gardens. Looking forward to some more pleasant bedtime reading.

I lost my camera at the weekend. I was going potty trying to find it - I had the case and the memory card so knew the camera itself couldn't be too far away. Turns out a little person had stashed it away at the bottom of one of the toy boxes. 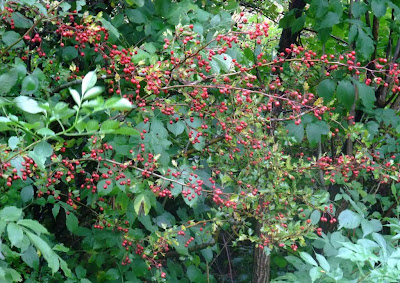 Went for a walk with said little person shortly afterwards, the weather was pretty dismal so just this berry photo to show for it.

Glad you found it! Once we lost the small brass ones of a set of scale weights - they absolutely vapourized and we never ever did find them - the last time they were seen they were being fingered by a small person. Fifteen years on he has no memory of the event, and I am totally tantalized and intrigued by where he could possibly have put them!

Love the flowers - A has such an artistic eye. And the double bass book is class!

I love all the flowers in your post, the last one best. Great book! My son would've loved it!