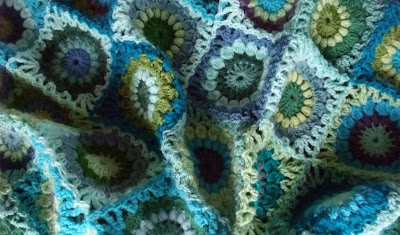 December 2009: when asked by Mum what I'd like for Christmas I request a copy of North and South by Elizabeth Gaskell and the DVD set of the BBC series of the same name, neither of which I have read/viewed.

Early 2010: I read and enjoy the book. The DVD's remain unopened.

April 2011: I get round to watching episode 1 of the DVD. It's not bad at all. I'm not too keen on the added violent scene (not in the book) which I find a little unecessary and which doesn't particularly endear me to the DVD version of Mr Thornton.

May 2011: I finally watch the remaining episodes while crocheting the new blanket. Episodes 2 and 3 are enjoyable though I remain ambivalent to the DVD Mr Thornton (probably because I'm making that darn blanket so the tv does not have my full attention). Now to episode 4, the final one, and the end, and what an ending! It defintely has my full attention! If you've seen it you'll know what I'm talking about, if you haven't then I'll say you should watch the series, you lucky things! It's a little changed from the book, and I'm sure it's not proper Victorian gentlemanly behaviour, but hey, it's a tv drama, make-believe, fantasy, and breathtaking! No ambivalence towards Mr Thornton remains, haha! 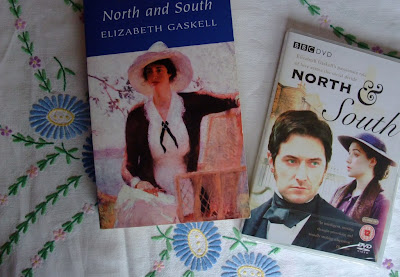 Oh crumbs... my amazon basket is getting fuller each day! Your blanket btw looks amazing. That does not look like an ordinary granny pattern so hope you will spill the beans on it. xx

I watched it when it was originally on TV and seem to remember hitting the rewind button a few times to watch the ending again!

I've been wondering if I would like this. I do like Richard Armitage. quite a lot actually. Looks like I'm off to Amazon to see how much it is.

Now I'll have to get out my copy and re-read it, AND get the video from the library. (Or maybe I should watch the video first, so Mr. M doesn't have to put up with a running commentary from me on how the movie differs from the book. Poor man, how he suffers.)

I'm so grateful for the BBC. Who else would put the time and money into these lovely costume dramas and remain (mostly) faithful to the text? On the other hand, why do producers / screenwriters feel they need to liven things up? Those of us who enjoy Mrs. Gaskell's work probably do so because of, not despite, the lack of lurid melodrama.

Forgive the rant, and thanks for the tip about the video. I'm always on the lookout for good things to watch. And the best things to watch are always from your side of the pond! The blanket is looking lovely.

I do love North & South, and just watched it for the first time earlier this year. I was also not particularly interested in Mr. Thornton's character (in the DVD - in my case, the book sits untouched but waiting for me), but loved how it turned out.

(sigh) I am happiest when crocheting to good TV like that. LOVE LOVE LOVE that blanket. The colors are JUST delightful.

I have the DVD but haven't watched it yet! The blanket looks gorgeous....love the colours you have chosen xx