Blocking and Backing the Tapestry Cushion

As The Cushion took me so long to make (closer to 13 years it turns out) I thought I would give it a little post all of its own.

Ten years of the making time were purely to finish the tapestry work. At times I would be so involved I couldn't put it down and was itching to work on it. Once I took it on holiday when we went to stay in a gite in Brittany. Another time I fantasised about working on it instead of being on holiday - we were cycling from Barra to North Uist in the Outer Hebrides one Easter week and the weather was terrible - very strong North winds and frequent hail storms, not our most enjoyable holiday. At other times the tapestry languished for months on end attached to it's frame and stored in a bin bag to keep the dust off.

Still, the tapestry work was finished three years ago, why did it take so long to do the final stage? I think I was just plain scared I'd wreck it.

Last month though I decided I'd get it ready for The Show (a deadline usually helps me get things finished).

I looked up my Kaffe Fassett Glorious Needlepoint book (old charity shop bargain!) and had a quick internet browse then set to. It was actually pretty straightforward. First I dampened the tapestry with a wet sponge. Then I pinned it out. I laid a tea towel between the tapestry and a plywood board and am so glad I did this as the tea towel was quite stained by the board once I'd finished. Pinning out out was alittle fiddly. I found it easiest to use sturdy drawing pins and a hammer. I used a piece of A4 paper to check the corners were square and that the sides were straight. As I had worked my taperstry on a frame it was only slightly squint and didn't need too much reshaping. I guess this would be a much bigger job if the tapestry was very out of shape.

I then left it attached to the board for a few days to dry.

Next I was concerned that the green border would be too thin once it was taken up into the seam created when sewing the cushion backing on. Fortunately I had enough dark green wool left to make another row of stitching right round the edge to make it wider.

I'd already found some fabric (charity shop velvet) to use to back the cushion. I decided not to bother with a zip. If it ever go so dirty it needed cleaned I could undo the last seam to remove the cover for washing then sew it up again after.

I pinned the right sides together then started sewing. As I had an extra row round the edge I could make the stitches into this which would mean there was no risk of the white canvas showing. For the first side I did a sort of stabbed back stitch making tiny stitches. I realised this was going to take forever so for the other sides I did two overlapping lines of a running back stitch, much quicker and it seems secure enough. 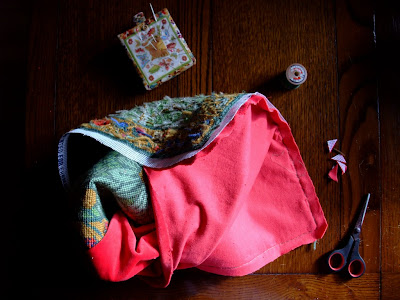 Time to turn it the right way round... 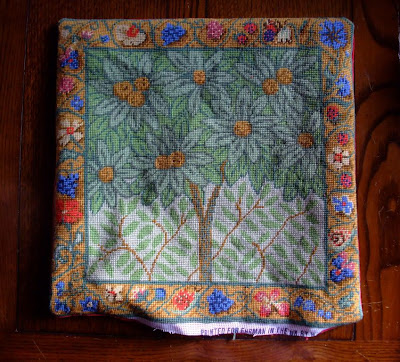 I'd bought a feather cushion pad from ebay, 2" wider & taller than the cover dimensions so that I would get a nice fat cushion. I shoved it in and sewed up the gap. 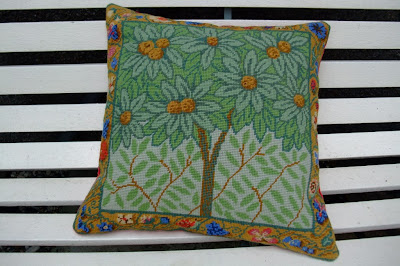 Finally it is finished. 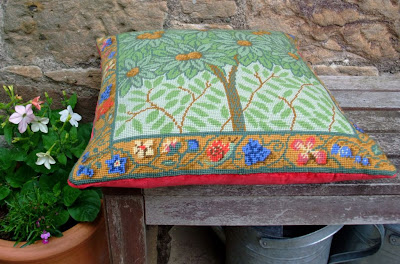 I like the red backing, it highlights the red stitching in the tapestry and makes a nice contrast to the green front. 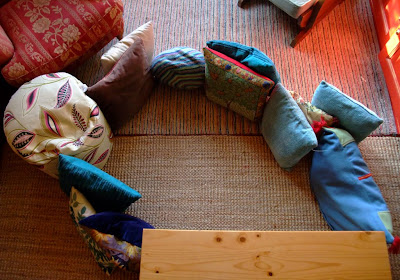 Now the cushion is just one of the many in the living room used to make boats/dens etc. I do watch that it doesn't get any rough treatment though, that's certainly not allowed!
Posted by andamento at 15:43

Simply lovely! I also like the way the red backing makes the green and red stitching stand out. Lovely piece of handiwork.

Oh wow,, it absolutly stunning, you must be so pleased with it, really gorgeous image of the tree with such lovely colours used, its great i love it.
x

It's absolutely gorgeous, and definitely deserves its own post. I think the red fabric is perfect for the job....clever you!

Oh so lovely, well done, it's beautiful..I have a half-finished tapestry somewhere.....

Worth all the time and work, it's gorgeous and you've finished it so beautifully.

What a lovely story to go with the cushion. I enjoyed the image of you pedalling doggedly through the Hebridean rain, dreaming of stitching instead! The red velvet is so perfect for it too. A real work of art. No wonder you keep a careful eye on it in the living room.

It's so pretty! I have been working on an Emily Peacock "Kiss" Tapestry on and off for the last three years, and I hope (eventually!) to turn it into a cushion, so I read this with interest. You should be really proud of it, what an achievement! x

You must be quite chuffed with it Ann.......all that time and effort. It looks great, well done.
Just looking at the detail in the border would be enough for me to put it back in the cupboard for another ten years, so hats off to you....

Have a great weekend,

That is one lovely cushion! I've just been given 2 part done tapestries from my mum-in-law, she said if I can finish them I can keep them so I'm now doing just that. They are not quite a s pretty as yours but lovely shades of purple. x

Beautiful! I love the red backing. You must be very pleased with it. I have some cross stitching pieces that need finishing (years in the cupboard). You have inspired me to drag them out and see what can be done with them.

It is a gorgeous cushion and well worth the wait!

It's beautiful, Anne. I love the gorgeous Pre-Raphaelite-looking design - and the red backing really makes the border pop.

Just think - now you have an heirloom on your hands! (Or sofa.)

Just left a complimentary comment but there was a 'problem' message...Love the cushion!!!

(and I bet it feels good to have it finished...)

It must have felt so good to finally finish it - you've inspired me to get my fox out and start stitching that again - heck, it already beats your 13 years but it would be nice if I could complete it before 20! Great blocking instructions and lovely tapestry. Bethx

It's gorgeous :D I would be the same though, worried that finishing the job might be the death of it. But that's hardly surprising after so much time and love has gone into the stitching.

I have a cross stitch sampler somewhere that I haven't worked on in about 10 years ... it was a kit, received as a gift, and it's the lack of a practical object at the end that is stopping me finishing it I think. Perhaps I should try cushions!