A last minute sporting event for the olympics has just been announced... 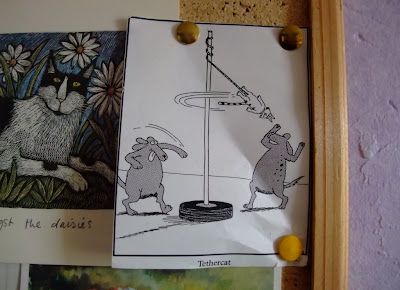 It puts me in mind of this cartoon, kindly left on my desk by a colleague one day (back when I used to have paid employment) and now residing on my noticeboard. 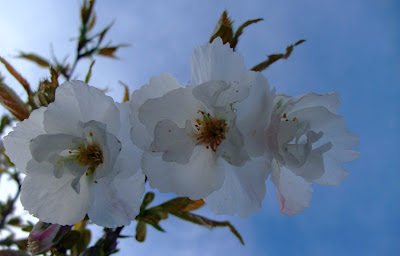 Our little cherry tree is flowering. There aren't many blossoms yet, it's just a small tree and seems to be very slow growing, but the flowers are rather pretty. 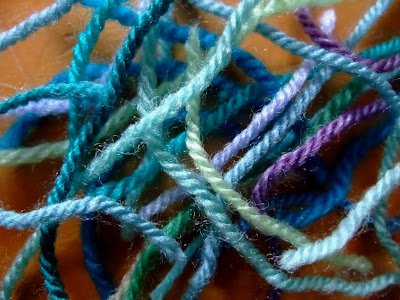 I've done a little bit of work in preparing the purple and green blanket for its tada (aaargh, those ends!), however, I've mostly been distracted by the garish stripey one. No more photos of it I'm afraid, yet... 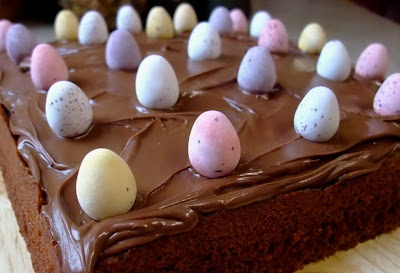 Finally I manage to make something involving nutella and mini eggs without eating all the ingredients beforehand. The nutella was a little bit sweet and gooey to use as an icing, so I wouldn't bother doing that again. Still tasty though. Wish there was some left now.

While we're on baking... 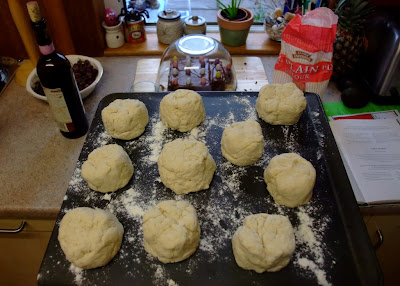 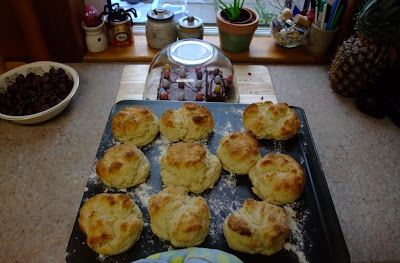 You can't beat a warm scone straight from the oven. Wish I had some of these left too. They're very quick to make though, especially if you don't bother to roll out the dough - I just shape balls of the dough into little fat cylinder shapes. Much less washing up to do too.

Did you spot the pineapple in the above photo? 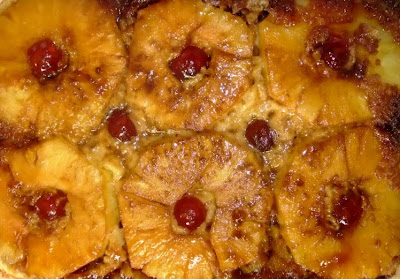 It became a pineapple upside down pudding and was declared delicious, though I personally thought it a little sweet. I don't mind that it's all gone.

It's become a rather glutinous post. To continue with the theme... 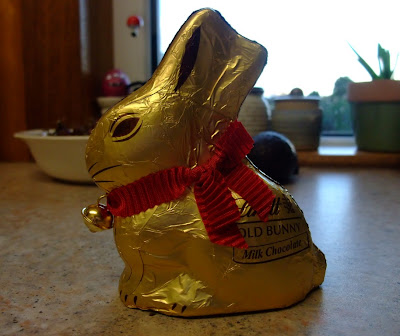 This was my Easter bunny last night.

And this was him about five minutes later. My willpower was non existent. I'm afraid to say I scoffed the lot and there's none left. What will I do tomorrow when the rest are tucking into their Easter eggs. Sigh.
Posted by andamento at 20:55

Yummy, yummy post with all things delicious to eat. Don't bunnies look a bit sad when we eat their heads. :)
Love the cat in training. So cute.
Anne xx

What a hoot seeing that pic of Molly and the Larsen? cartoon......very funny.
What an imagination some people have...

Your cakes look delish Anne and I'm with you on the warm scones...yummy.

Now that little Lindt bunny would've been too tasty not to devour once you started.
Mind you I bought No. 1 the exact same bunny last year and I know he loves his chocolate, but it has sat untouched on his bedside table all year long. No doubt it has turned white with age........
What's that all about? I asked him...... apparently it was too cute to open and start biting into!!
Oh well....

Have you seen the Aldi easter bunny ad - it is sooo cute!
I haven't made scones or a pineapple upside down pudding since I was at school, but I've been meaning to do some scones for a while and now you've spurred me on.

ooh those scones look good! I've never made them mylsef, but they are lovely fresh from the oven with jam and cream!

I think it is a very yummy post. I wish I could dive right in the computer screen and grab a piece of that cake.
Happy Easter,
Meredith

How do we enter our cats in the swingball event?!? Brilliant! Lovely delicious goodies in your kitchen, pineapple upside down pudding a personal favourite. However am feeling a little sick after demolishing many many mini eggs whilst doing me crochet this afternoon!

Great tip to shape the scone dough rather than cutting it. I can't help squashing it a bit when cutting. maybe i need a sharper cutter tho! loved molly on the swingball. Gold for Molly.

I just love scones...especially fresh from the oven. I've eaten too many goodies today as well. Perhaps we had both better limber up with your cat!?! Joan

Wow, your weather is better than ours, it's chucking it down here... still, the chocolate helps!
What would we do without mini eggs for baking at Easter?

I've eaten all my mini eggs and now you've got me wanting cake. Still we need the carbs to keep warm in this Scottish weather.

Your scones look delicious. Seeing yours, I think I must make mine too thin, next time I'll make them fatter.
Such a pretty cat, I would love another ginger but we have 5 and that's enough for now. lol
Briony
x

I like your pineapple upside down cake....yum! I bought the boys and the hubs a Lindt bunny each, they are just so gorgeous to look at...for around half an hour it looked like my three year old was too loving to actually break the bunny, but the chocolate won through in the end.

We have two cats who still play with anything despite being 13, but they've never played swing ball before!

At first I thought the label said "Old Bunny"....

Great Larson cartoon! He was a crazy genius. And the yarn ends photo is wonderful. A belated Happy Easter toyou and yours.

Yum, yum, so many nice things to eat!

We've just returned from a Yorkshire trip, we arrived with 4 gold lindt bunnies and have returned with 12 in various sizes!