I think we'll have waffles for (a late!) breakfast today. While I'm waffling away about waffles here on my blog I'm hoping the kids are getting themselves dressed. A can get herself dressed fine but N still likes a lot of help and, yes, I do still help him as otherwise it takes an awful long time (yup, he's got me sussed!). During the holidays I find the bribe of a sweet breakfast treat encourages him to make more of an effort, though to be honest he often just gets A to help instead.

Anyway, these photos were taken way back in August and I'm just getting round to posting them now. The recipe is from a German friend who often treated us to waffles at her house. We were round tucking into them one day, idly discussing where one would buy a waffle maker. The answer - Lidl! They only have them now and again, you just need to watch out for them, or have a friend who scouts for you which is what happened in my case and I bought the last one in the shop at the time. They were £15 as I recall, and it is something I use fairly regularly and it's easy to store, not being very large. So, yes, I'd recommend one. While writing this I do recall Nigella having something (not good!) to say about waffle makers in her "Kitchen" book, I'll dig it out:- "...attempting waffles for my three was more stressful than you can believe..." Hmmm, I reckon she's just been using the wrong recipe or something. Anyway, she also says she's not yet taken her waffle maker to the charity shop so if you know her, (and I did once meet someone who did - at the time I was in Italy with a mainly London based orchestra, which sounds terribly grand but wasn't - I'm never taking a bus to Tuscany again, and we had the same meal (roast pork) EVERY single night of the trip, well, one of the times we were sitting down to eat our pork I passed on a not too kind comment I'd heard about one of Nigella's books, on hearing which the lady sitting next to me immediately leapt to Nigella's defence saying that she was a neighbour of hers and a very nice lady too!) you could pop round and ask if she still has it and offer to take it off her hands.

Right, here's The Recipe that works:- 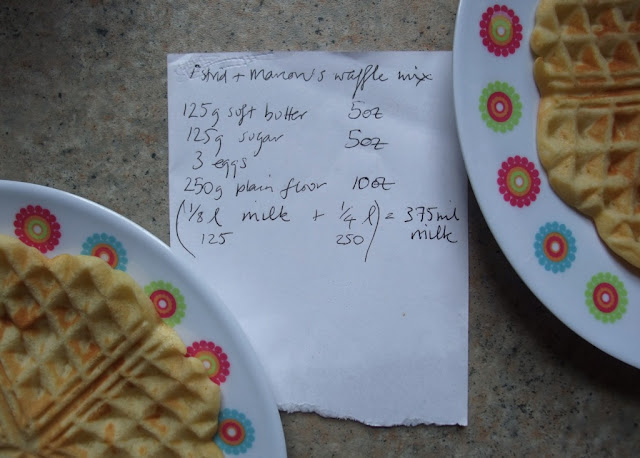 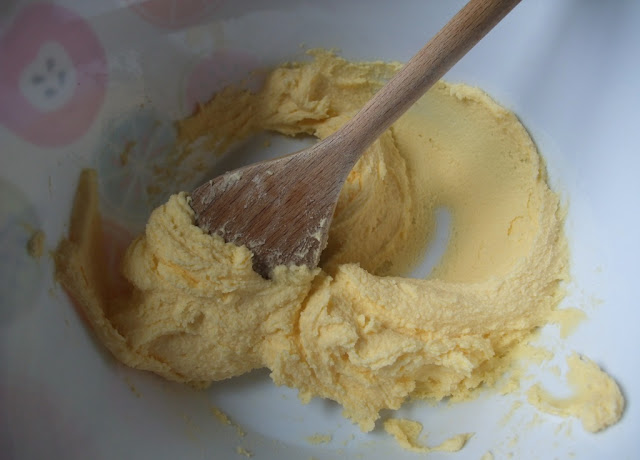 I make up the mixture in a similar way to making a sponge cake. First I cream the butter and sugar. 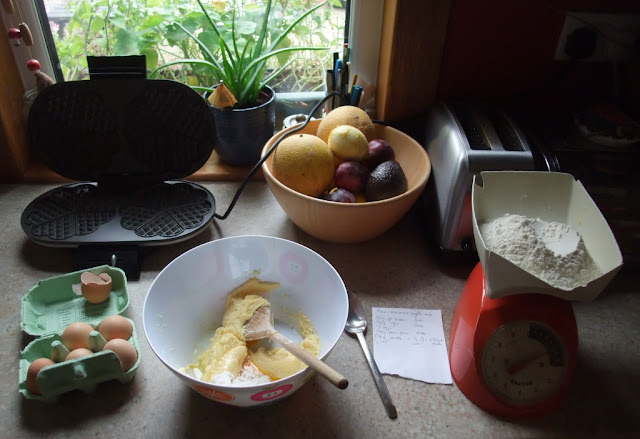 Then I add the eggs one at a time, each with a little bit of flour added before mixing so that the mixture doesn't curdle. 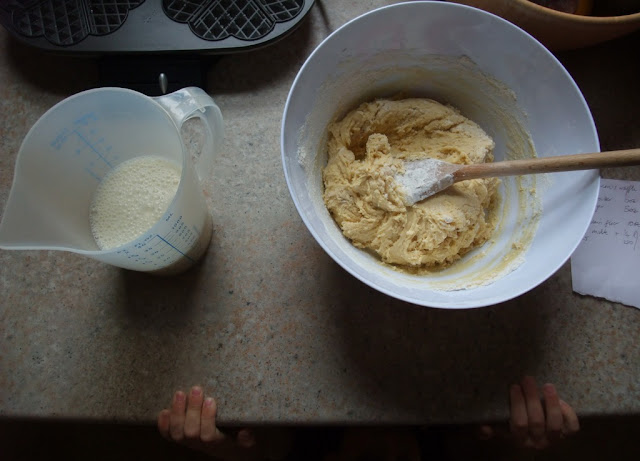 The I mix in the rest of the flour, 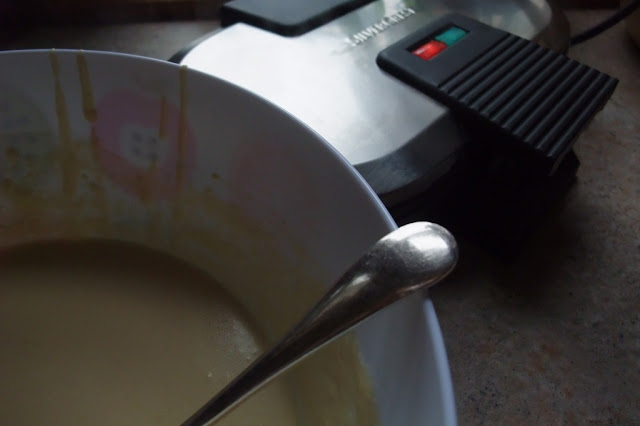 before mixing in the milk to make quite a runny batter. 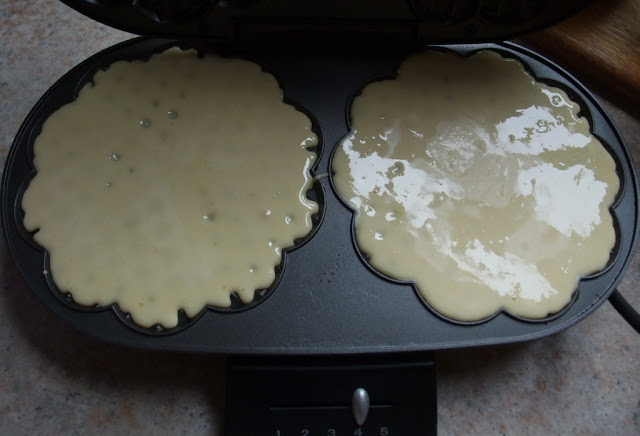 Each waffle takes about two and a half tablespoons of batter. I let them cook for around two minutes. 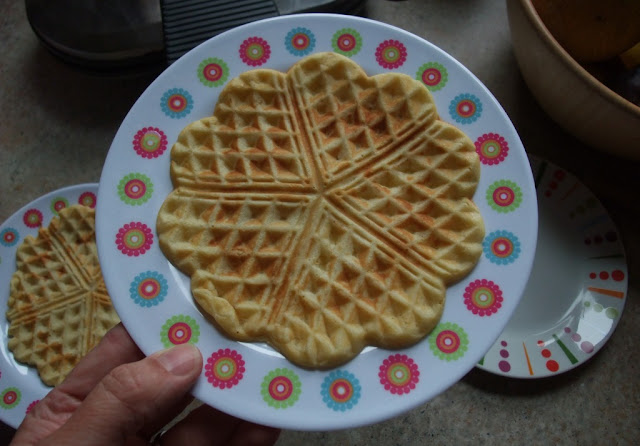 And that's it! Serve warm with a sprinkling of icing sugar (the childrens' favourite), a squirt of golden syrup (my favourite). I hear it's also nice with Nutella (though I daren't buy jars of Nutella as I'm prone to scoffing it without restraint), or raspeberries, strawberries, whipped cream, honey, chopped nuts etc...

So, Nigella, if you're reading this, dig out your waffle maker and have another go, before your neighbours come knocking...

I was just thinking we could do with another waffle maker this morning. Ours made its last waffle a while ago and I have not replaced it. We made pancakes this morning, and its on a new stove, its electric and my last was gas, does cook differently. I ended up putting the pancake mix in a glass pie plate and put it in the oven, and it came out thicker than a pancake and was liked with syrup on. Nice pics in your March round-up.

Your two are definitely younger than my two but I still run the bath for my 11yo... if he does it, it takes such a long time! (and I know that's not right, he should really start to do it by himself...)
I have never mastered waffles - I did dropscones the other day for the first time and once I got the batter to the right consistency, they were lovely.

Forgot to say, in Holland you can buy jars of 'speculoos spread'. Speculaas/speculoos (depending on where you're from) is a biscuit that sometimes we eat in a sandwich - yes we have a very odd cuisine in Holland! - someone came up with the idea of making it into spread like Nutella. I have bought two jars before and like you, I just scoff the whole jar. So now I've stopped buying it - but it would be just as good on a waffle as Nutella I reckon!

I'm very tempted to hightail it to Lidl in search of a waffle maker, as I'm very partial to a bit of waffling. Look delicious. Have you tried them with maple syrup?

Ooh, Mr K was asking about waffles only the other day ... very timely, thanks for sharing :D

Had to read this as I am about to cook waffles myself ... also for (a very late) breakfast!

We have one of those deep waffle makers (Belgian?) - the cooked waffles hold oodles of butter. I like to whip the egg whites separately and fold them into the batter for a very fluffy and crisp waffle.

Now I'm ravenous. Off to the kitchen. :)

yum! my waffle recipe has beaten egg whites is so is a bit of a faff, this looks easier! I do love them so. My parents have an old norwegian waffle iron, it is cast iron and makes squeaky sounds when the waffles are cooked. I assume this is the steam but when we were little we thought the waffles could talk!

what a delicious breakfast - may have to try that one day!

Love the photo with little fingers peeking over the counter. Mmmm...waffles!

Mmmm, I think we'd like those. And I have the exact same problem with nutella. Really can't trust myself to buy it. Juliex

I've been looking for a waffle maker for ages so thanks for the Lidyl tip - will keep looking and can't wait to try out your recipe ;)

having tasted Astrid and Marion's waffles for myself I can testify to how utterly delicious they are. I would hesitate to buy a waffle maker though as I would just eat stacks of waffles every day.

Thank you for the recipe! We got two waffle makers as wedding presents (one European from our Belgian friends) but don't often make them as we end up with so many. We meant to make a load last weekend when it was our little boy's birthday but didn't get round to it. Will definitely save this recipe though.

They look good-now I just have to go round to Nigella's!

This post made me laugh! I adore waffles and will avoid buying a waffle maker for the same reason you don't buy Nutella. :-)

I like mine with maple sryup and fresh berries. Yum. Right, I'm off to Lidl... x

That's good to know about Lidl stocking waffle makers. Our Norwegian one is giving up the ghost, and we're bereft. The prospect of 2 children home from university in the summer and no waffles for breakfast is not a happy one!

I am very happy to visit your site and i did like it. I was able to get some informative topics. keep it up and you can also visit my site for your reference. Thank you and have a good day.

There is noticeably a bundle to learn about this. I assume you made sure good factors in features also. online casinos for us players