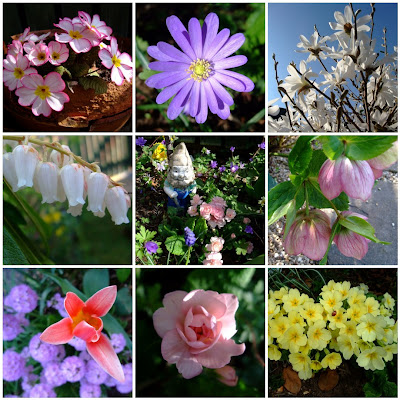 I couldn't help myself, I had to do it. I think this photo mosaic of my Mum's April garden is a big improvement. I'm going to get it printed for her. 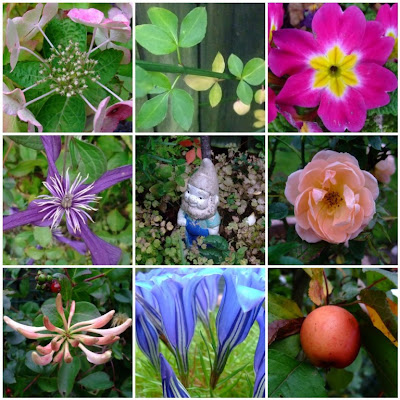 And while I'm at it I'll get this one printed too, it's from last October.

I like the wee gnome who features in the centre panel of both mosaics. I gave him to my Dad many years ago as a jokey birthday present and was very touched to find he'd taken him with him when they moved house. By the way, I've still not forgiven my parents for moving! For nearly 40 years they lived in Angus which is where I grew up and where I liked being able to go home to every so often, not just to see my parents, but to catch up with my old school friends and my old haunts too (it's great cycling country!), then seven years ago my folks decided to up sticks and move 170 miles to the southwest. Where they are now is still a nice part of the country but it's a bit busy traffic-wise in my opinion. Anyway, they like it there which is the main thing (I suppose!)
Posted by andamento at 23:02

They really are beautiful mosaics, they would make pretty greetings cards I think!
Also had to mention that your crochet covers on the previous post are just meltingly beautiful, the colours you have chosen are stunning and really zingy!!

Much love to you, thanks for visiting my blog and leaving such a nice comment too.

By the way, how are my cows doing? Have you been to visit them since the winter...he-he....

I'm completely with you on parents moving. My brothers and I were seriously unimpressed when my folks decided to move from the home we grew up in - and they only moved 15 minutes away! But we have got quite attached to their new place and, as you say, its kind of up to them...but still! Juliex

Do you know some people are so thoughtless!! Not really I'm sure they miss you too. Your montages are beautiful. Would love to know how to download them to blogger. Perhaps if you have a mo you could email me, address on my profile
Jenny