For my last teaching placement I was in P1 where the children are mostly aged 5.

The topics while I was there included "Under the Sea", "How Things Grow" and "O'clock Time". These provided great opportunity for some fun arts and craft activities (preceeded by a relevant learning intention of course - all teacher bloggers out there: what are your opinions regarding learning intentions? I can see that lessons generally need a point to them, but does it have to be announced at the beginning of every lesson and in such narrow and limiting terms. Learning is happening all the time and can take many different directions...)

Anyway, here are some (not great) pics of what we got up to... 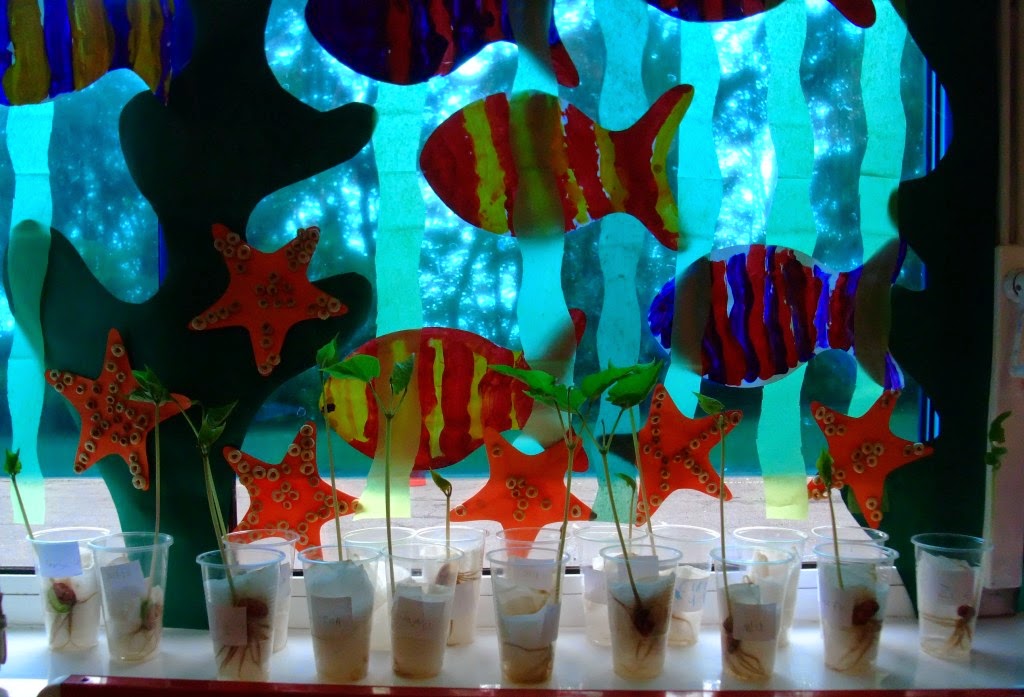 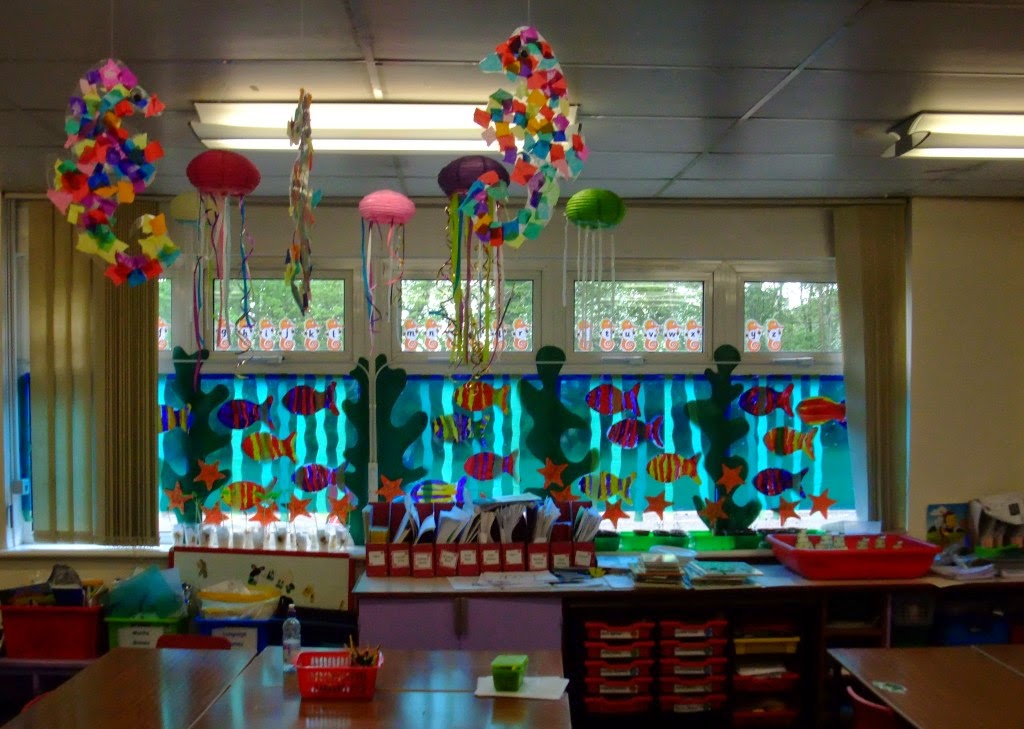 A wider window view. Hanging from the ceiling are the seahorses and jellyfish some groups made. 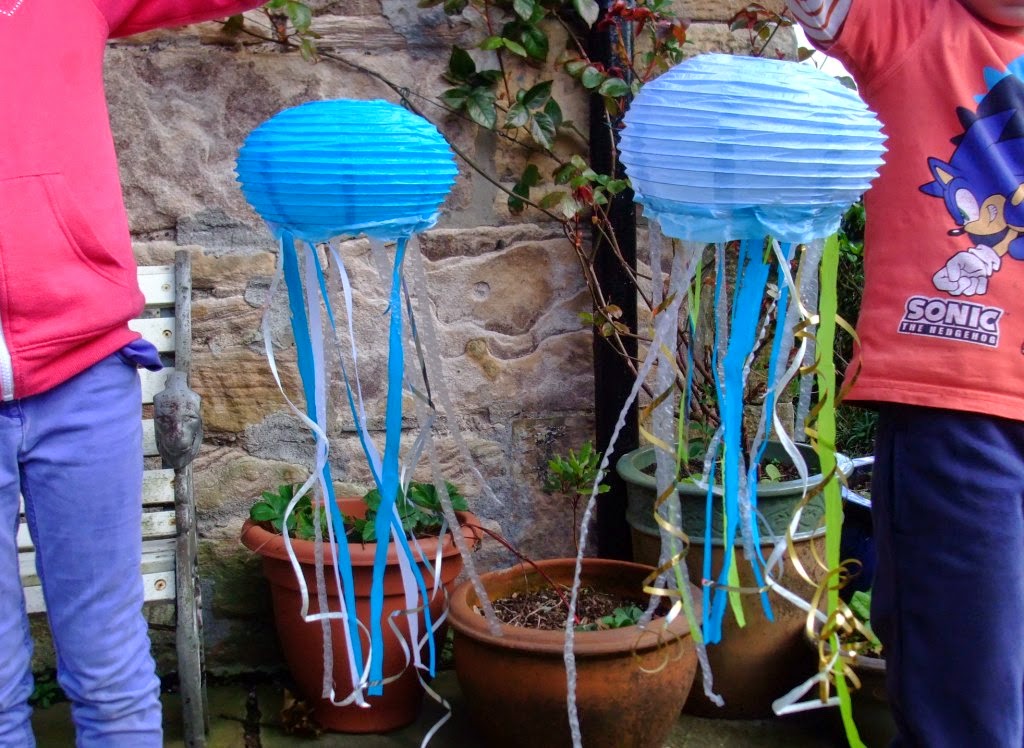 A & N created the prototype jellyfish (from an idea I saw on Pinterest). They ended up making their own versions of most of the craft items we made in class - now their bedrooms look like mini oceans. 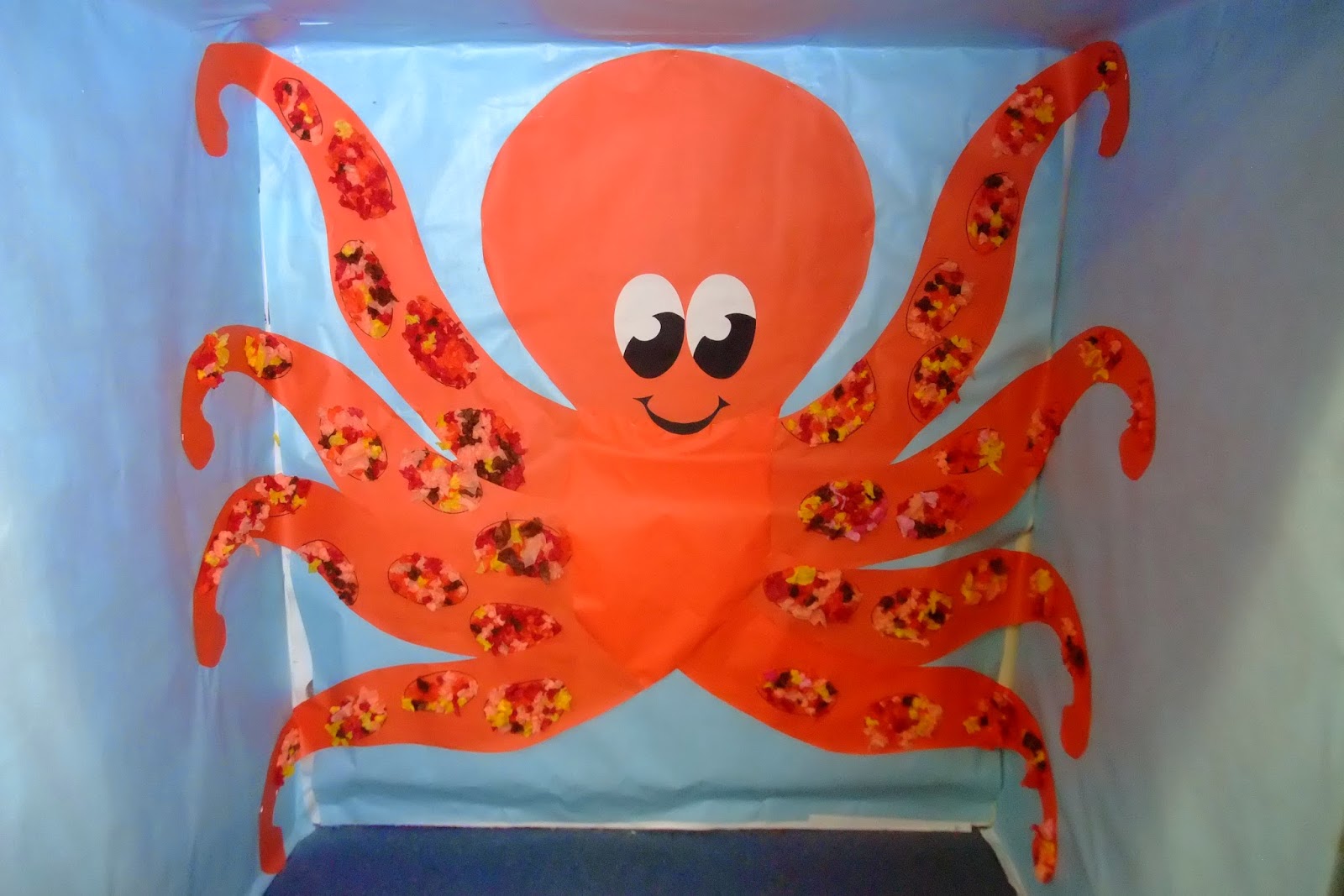 A giant octopus for the under-sea cave. By the time the cave was finished there were turquoise and green crepe and acetate seaweed streamers at the entrance and pearl fairy lights inside. It was a special place for the children to go and play once they'd completed their work. I put sea-themed finger puppets and a finger puppet theatre in the cave for them to play with. There was space for only four children at a time, it was very popular.

Octopuses are fascinating creatures. They are intelligent, can squeeze through tiny spaces (no skeleton), have three hearts, their blood is blue, all are poisonous to a certain extent, and both the male and female die within a few months of mating. 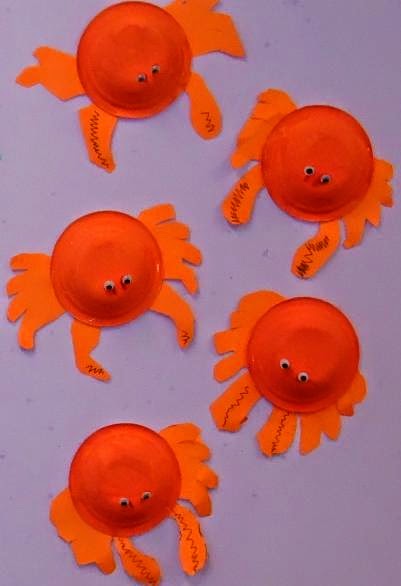 Crabs. Did you know that crabs have ten legs: eight for walking and two for holding food or attacking? It's amazing how many crab illustrations are drawn incorrectly with only eight legs altogether.
. 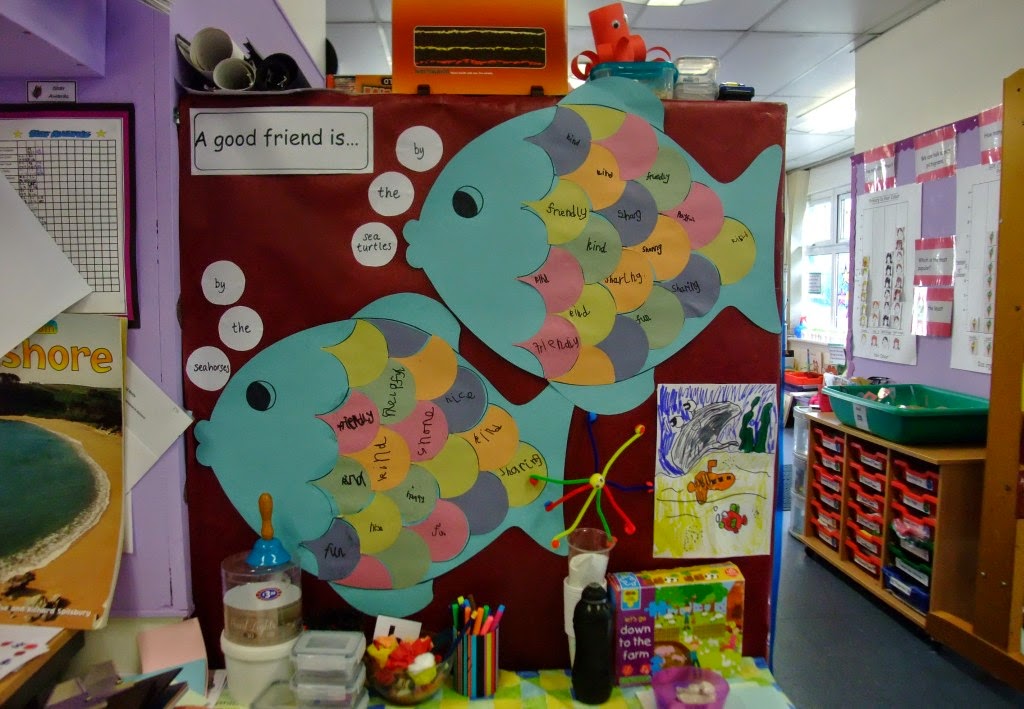 Friendship fish - each group made one. Above them you can see the little wormery we set up - one boy in the class was absolutely fascinated by worms and used to collect them in his lunch box after he'd eaten his sandwiches, I linked it to the "how things grow" topic just to keep it all relevant. There's also one of the little ocopuses (or octopods or octopi) we made up there too. 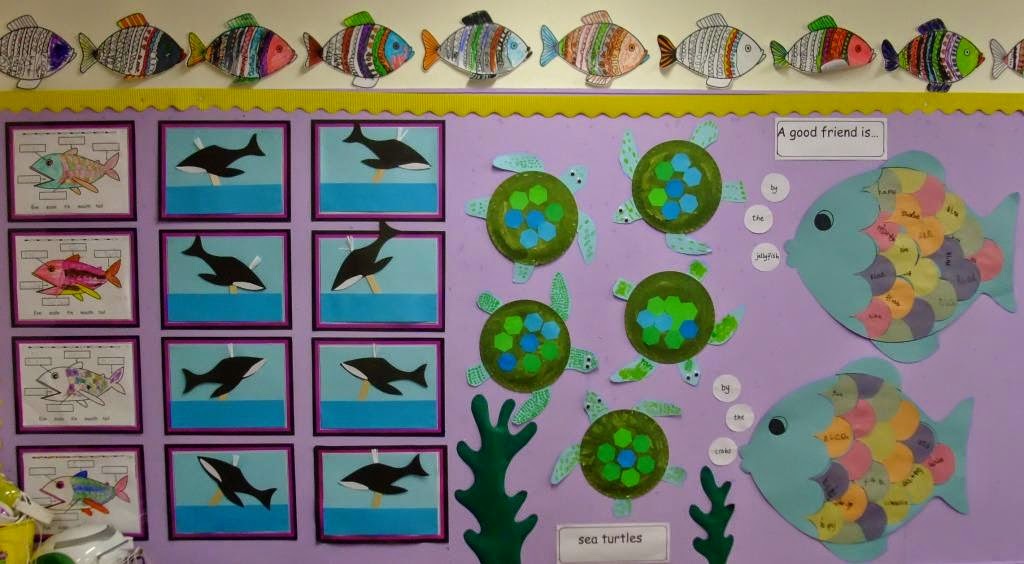 Continue-the-pattern fish on top, fish diagrams to the left, humpback whale puppets, sea turtles and more friendship fish. We all found the humpback whales very interesting, especially the way they hunt as a team and make a bubble-net to trap fish, please have a look here, it gets quite exciting! 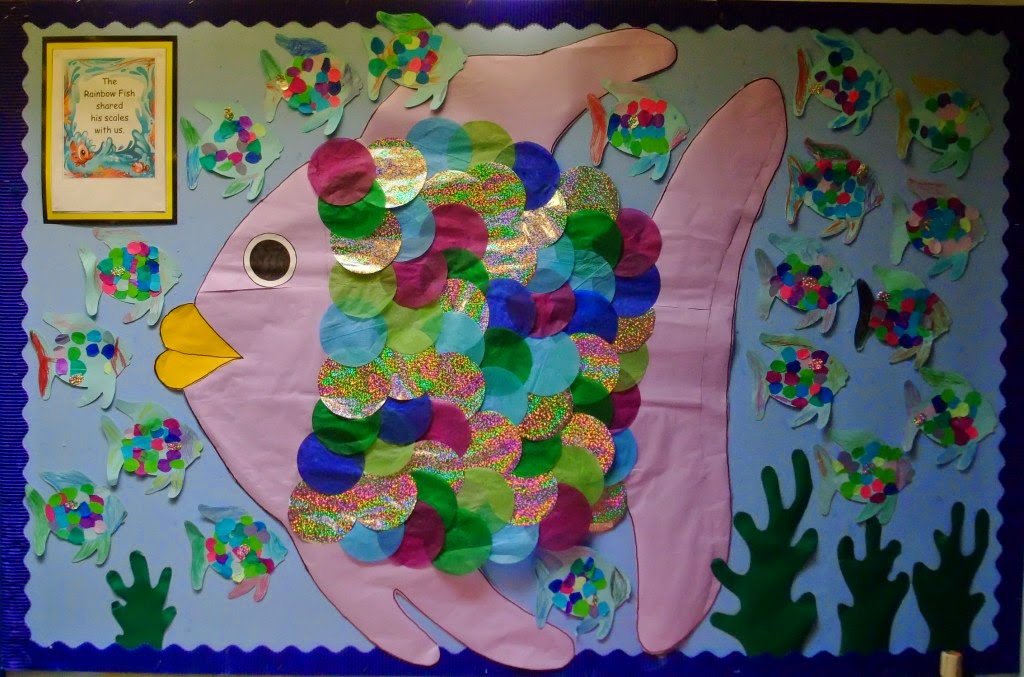 The Rainbow Fish sharing his scales. 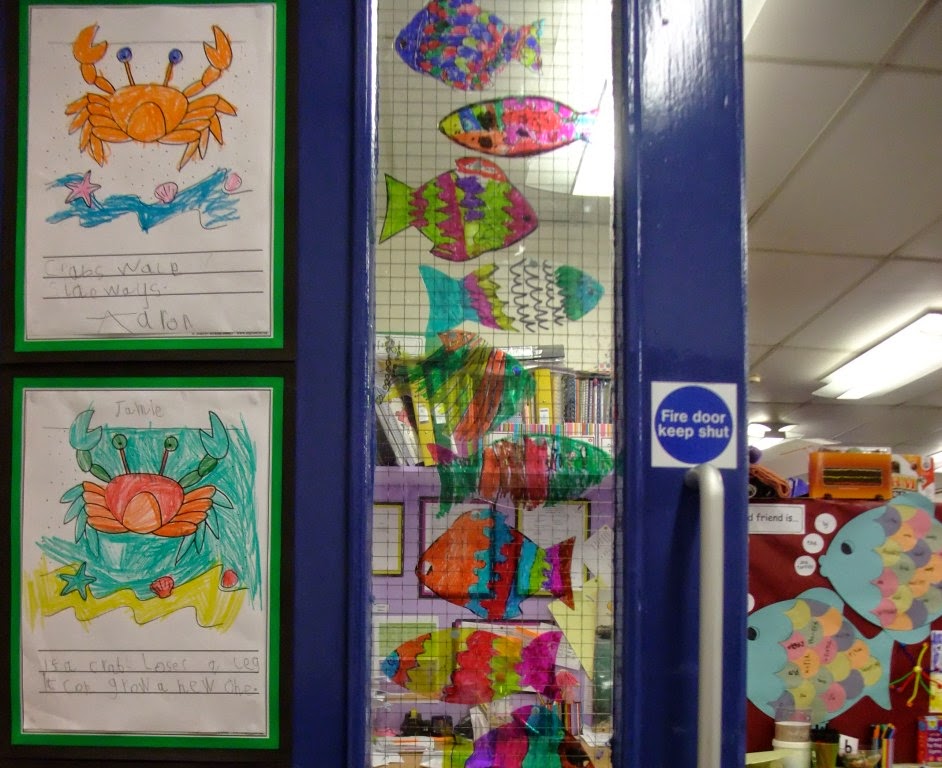 Parts of a flowering plant. Cut cupcake cases for petals, wool for roots. 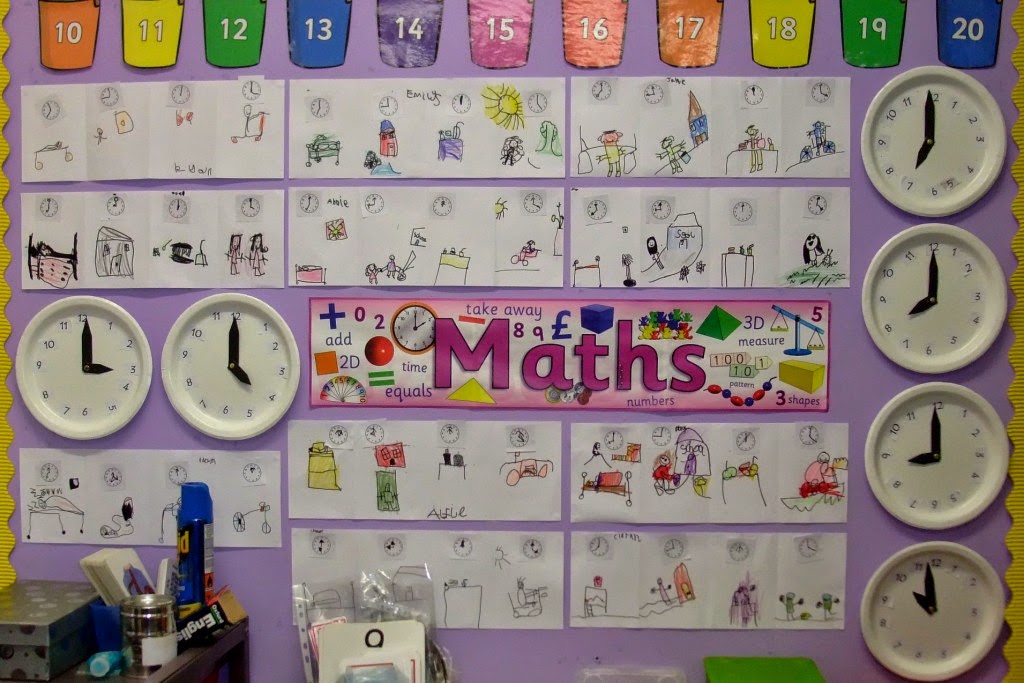 Aside from helping out with the school trip that's my placement finished, as is my teaching course. I passed, but not without an incident towards the end of the placement which has rather soured the experience somewhat. It involved some kind of issue between the teacher and my tutor: I don't know the details and neither will talk, but I was granted a pass in the end.

Come August I will have my own class. I think that's hilarious/terrifying/exciting!
Posted by andamento at 23:01

CONGRATULATIONS Anne, I'm so pleased that all your hard work was worth it.
I hope you are really happy in your very worthwhile career.
Jacquie x

Congratulations on finishing! I hope that everything in your teaching future goes really well and that you enjoy it more and more. It looks as though you have done amazing work with this class! xx

Congratulations and very well done to you. How scary having your own class at first but it will be brill! Especially with your creative and imaginative talent you'll have them eating out of your hands.

I'm assuming learning intentions are the same as aims and outcomes and if so I only ever write these after the fact. I also hate the constant summary/signposting tutors love you to put in all the way through a lesson. I find it intrusive and breaks the flow. The best thing about being qualified is being able to make the lessons yours and your students. The only advice I would give is script/annotate your lessons and write the ruddy references down(!) as there is nothing worse than going back to something and not being able to locate the source material. Enjoy!

I am sorry there was an issue, but a big CONGRATS to you!!! Well done, I know you have been working so hard, and from what I see you are going to be a brilliant teacher.
Hugs,
Meredith

Congrats. You have worked hard for this and I know you will be an amazing teacher. Loved the whale video. But then, I love anything whale. :)

Congratulations. Well done. Teaching is a fantastic and oh, so important job. You have to learn to pay lip service to various bits and bobs/'in' ideas/ ridiculous suggestions/ new daft legislation so that you can focus on what is most important, educating your class of fascinating individuals. Have fun and good luck for September.

Congratulations! It all looks so colourful and interesting.

Very creative. It's a much brighter school than the first one I attended. That was grim and grey and the only colour in class I remember was those little wooden blocks in a box for counting shared between 30 other kids. Didn't see them often and I got a primary colour once but mostly the little white square cubes were passed along the line of waiting hands as they were more numerous. Gold stars and some glitter once a year was as racy as it got 50 years ago in my school. Still enjoyed it though :o)

Congratulations! Don't be put off by the incident.

Well done on passing! Whatever happened didn't make any difference to that so good for you. I love all the fish work and have learned a bit myself about octopusses and crabs. I agree on the learning intentions-it kills things dead sometimes. I much prefer the approach of setting up scenarios either stories or problems to solve that stimulate the children's imaginantion and get them excited to help/solve things rather than telling them exactly what it is that they will be learning. In my school with the new head we now also have 'steps to success' which are tedious in the extreme and can be done in a much more integrated way. One of the many reasons I am leaving! I hope you find a great school for September that is run by someone with a heart and common sense!