The Other Crochet Scarf, and a couple more...

Ta da! Here is the first crochet scarf I ever started... 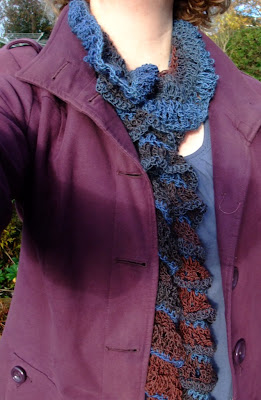 ... and it will not be getting frogged! It's the same pattern as the one in my previous post but made using more suitable yarn (the reason I didn't like the last one was that it felt bulky and springy and was just a little too flamboyant for me).

I ran out of yarn on the last row while making this one, hence why it's the first scarf I started but not the first I finished - I made the frogged one while new yarn was on order. 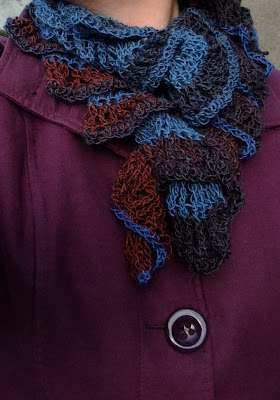 The pattern is Cascade Scarf by Kittyboo Crochet, and the yarn I used is King Cole Riot in shade Spirit.

Sadly I'm not keeping this one as it is intended for a friend's birthday gift. I have, however, started one for myself seeing as I did have to order another ball of yarn, it'll just be a little shorter (to be honest I think I'd make the scarf shorter anyway, I plan to start with a chain of 150 instead of 170).

Now here's what has happened to the yarn from the frogged scarf... 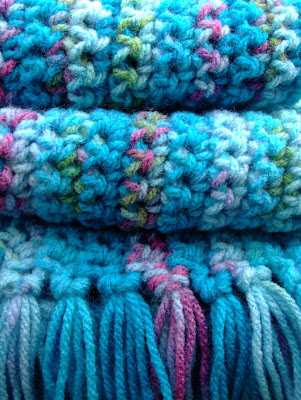 ...I used it to make a simple scarf just using (UK)dc stitch. 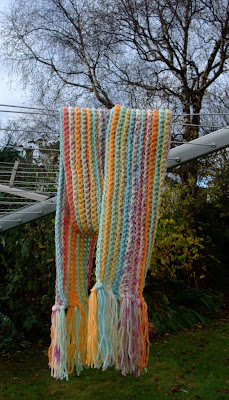 ...again using (UK)dc stitch but putting the needle through the back loop only so as to give a more ribbed effect. I think I went a bit mad with the fringe for this one but it took me long enough to do so I'm not changing it! It's also not really my colours, but I made it and the other dc scarf in order to donate them to the craft stall at the upcoming school fair, hopefully someone will like them!

They are great - but I particularly admire the Cascade scarf you are wearing. It looks really beautiful in those colours; warm, too!

Very pretty ruffle scarf, the colours are great. I saw on a website recently handknitted scarves selling in a major high street store for between £135 and £165, you could make a fortune.

lovely scarves. good to make something practical look so pretty. I think I will be first in the queue at your fundraising event!
Louise

Lovely scarves but I adore the first one. Great job. x

They are so pretty. You are a wonderful scarf maker! x

Lovely scarves, especially the colours on the first one!

I love this scarf and I plan on making one very soon. May I ask what yarn you used for this one (I'm really new to the joys of crochet so I never know what kind or how much yarn I'll need). Thank you :)

I feel so embarrassed...I actually read through your post again and realized that you had already said which wool you used. I've now got some king cole riot in magic on the way.