Five little felt owls all in a row...

...and made them a little higgledy piggledy, so there you go. 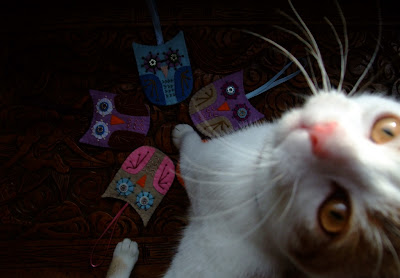 I'm rather enjoying making the felt owls, it's such a lovely design to start off with (from Christmas Crafting in No Time, see here) and I get a lot of pleasure from selecting the different colours of felt and thread.

I've also been making some other felt Christmas ornaments...

... most are new for this year, though the gingerbread man (and snowman and Christmas pudding motif which follow) are old favourite designs (see here (2010) and here (2009)). 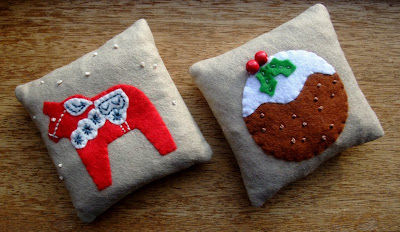 I adapted the pudding design and used it for this little scented pillow. It's stuffed full of cloves and cinnamon and smells divine. I'm also pleased with my dala horse motif which is new this year too. I used the colours from my bargain ebay horses (see here) as inspiration. 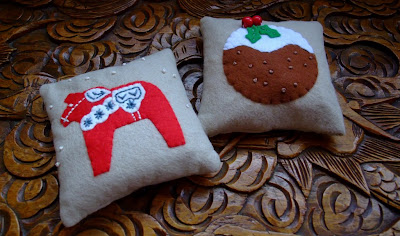 Mmmmmm. There'll be some more of these to come and I think I'll be keeping one for myself (all the rest are to be donated to the nursery/school Christmas fairs). 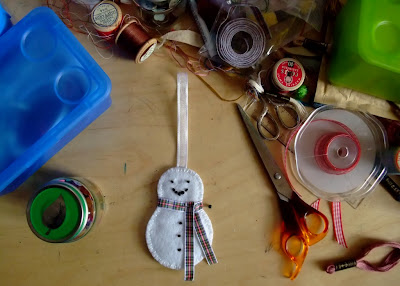 Here's the snowman. He wasn't quite ready for the photo shoot as his scarf needs a little stitch to fix it in place.

Not shown is a crochet snowflake attempt. It needs blocked, in the meantime it was being played with and has temporarily disappeared. 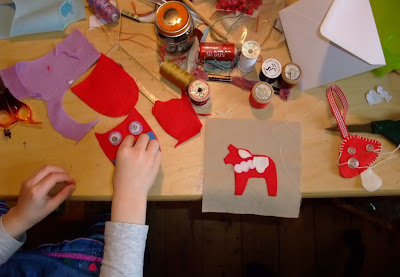 And someone else has got the owl bug too!

Other bloggers have posted photos of their Christmas crafting in progress which prompted me to share mine. It's nice to know I'm not alone! The ones which stuck in my mind were Summerfete (here) and Yarn Round Hook (here).
Posted by andamento at 18:29

What a fabulous idea to make little clove/cinnamon scented pillows. I love the dala horse one. The dala horses are so expensive on ebay aren't they - I'm always hoping to find some in a charity shop one day as I only have 1.
Happy crafting!
p.s. Thanks for the mention

I adore your owls and love the little pillows. I soooo nearly bought the craft book last friday but restrained myself, just in case..... The pics of the owls are defiantely getting my fingers twitchy!!

Felt is such a lovely medium to work with :) I've started a little project today with it - can't share it though as its for someone who reads my blog!

The owls are gorgeous! The snowman looks cute too.

I love the scented cushion idea, and the owls are adorable!!!

I love everything, you are so talented. I love how you put them all together, the colors well everything.

Looks great! thanks for sharing.

Lovely! I reckon making things like this is the best part of Christmas. I too feel all inspired this year, whereas last year I couldn't get that Christmas feeling at all, which was all a bit gloomy.
Grandson and I have been saving old boxes for months, ready to make a Chrissie village for the mantelpiece - can't wait to get stuck into it!

I have been doing a bit of stitching with felt, beads and thread and thoroughly enjoying the creative processes.

Your decorations are lovely and I love the pud stuffed with cloves and cinnamon.

Enjoy your week and hope there's plenty of stitching time to be had.

Those owls are so gorgeous! Meg and I were enlarging the pics to see if we could give them a whirl at the weekend. Robert liked you cat and asked if he could have one for Christmas. Er...no.
Sandra x

Love your ornaments especially the owl.

Oh Anne, you were obviously born with the embellishment gene! (My DNA stands for "Does Not Adorn".)

Those owls are just perfect. Love that upward-looking kitty photo.

I'm working on Christmassy crafts too but nothing so decorative as yours, I must say. Thanks for giving us a peek.

If you have toys and children clothes you don”t need pleas contact me or send them
to me :
Ionescu Otilia , Romania , Plopii slavitesti , 147255 , Teleorman
thank you !
Ps. Greate blog!

These are all wonderful! I especially like the scented pillows. I may have to make some of my own now! x

I like your use of colours Anne.They blend really well together,like flowers do in nature. A,hem,that,s enough of that,back to the football and other suitable sports.
bob.

I love your Christmas decorations, so charming!

How busy have you been? The Darlana horse is marvellous! The owls are fab too.

Don't know what's cuter, the owls or the kitty. I love the colours you have chosen for them. You have such a great eye for colour!

Lovely felt ornaments and adorable pink nose! You are so clever. I love everything you make and wish I had some of your talent.

It's a lovely collection of ornaments, I do especially like the owls and the scented pillows. Bethx

Those owls are beautiful. You have made them so perfectly.

I love embellishments... Sigh of contentment.

I've left comments that have disappeared... anyway, SELL THEM, I would definitely buy some.x