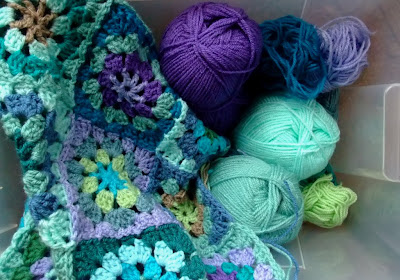 ...it's only five squares by four at the moment but is growing fast. I'm using my favourite greens, teals and turquoise but am adding more purple (another favourite colour) and brown.

It's my third attempt at starting a new blanket. The first two attempts were following a "scrumptious wave" pattern but I didn't like how they were turning out.

This was the second attempt. Nope, I still don't like it, though I loved one made in this pattern that I'd seen on flickr. I think I'm just liking granny square variations at the moment.

Depsite getting the crochet bug, I also recently dug out a tapestry cushion cover I'd started about a year ago, and have doubled the amount of completed stitching. 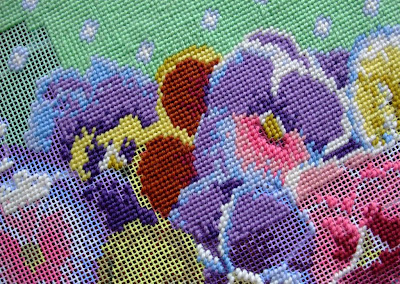 Interest in this is starting to wane a little again now though. I'm also hoping it won't look too grannyish once finished and there's perhaps just a bit too much pink and yellow in it for my liking. I'll persevere.

As for the patchwork, it's at the bottom of the pile, feels too much like a summer project somehow.

Aside from crafting I have loads of other jobs started but not finished. last night I took a hammer to the loose wall covering in our porch. 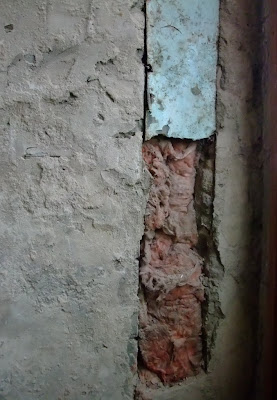 This is what the wall now looks like. Not good! But at least we can see what's there and get it sorted properly. 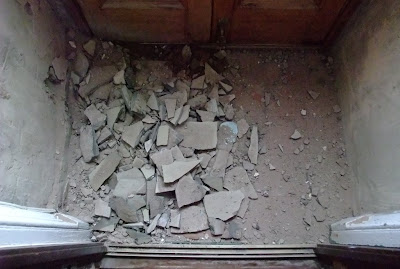 This is some of the rubble, it turned out it was concrete not plaster, and it was a dusty job taking it off. 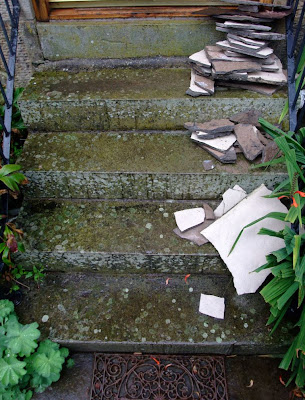 The bigger pieces are on the steps outside. 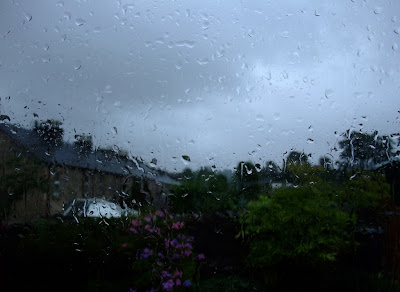 As you can see, it's raining here now. This means that I'm also not able to work on the doors and gates I was midway through stripping of their peeling varnish. Here's hoping the weather improves before too long as I've lots of jobs I want to get done before winter. I've definitely got that end of summer feeling now!
Posted by andamento at 13:56

Mmm, my colours (except brown)! They do look good.

Did you enjoy your bit of bashing?

We have weather just like that here in middle England.

Ooh such gorgeous colours in that blanket!

Your colors are beautiful, some of my favorite. I love the way you have put them together. Lovely.
Meredith

I love your blanket and the colours, I'm making one at the moment that I think of as my "wave" blanket, because I was thinking of the colours of the sea and sand

I do love your colours, so peaceful and calming.
We still have a tapestry cushion that a uni friend (http://emmavarnam.co.uk/) made for us when we got married. It's of hydrangeas and a bit worn now, but lovely none the less.
I really don't miss the Scottish weather!

I bet you can pretty much guess what I think of those colors. STUNNNNNINGGGGG

Looooove the colours of your new blanket Anne, just gorgeous. Look forward to seeing its progress.
Well done for continuing on with your tapestry cushion cover. The little snippet we can see looks very Summery and colourful. Such a lot of work goes into them, I'm sure it will wonderful when it's finished.

I hope you get some more fine weather to complete your August jobs.

It's a beautiful, sunny morning here after a light frost and a rather wet Tuesday.

Enjoy the rest of your week,

I love blues and greens.
So peaceful!
I actually liked your ripple blanket too! But if it's not rocking your boat, then it's not right!
Xx

That blanket would look very nice in my bedroom - it matches the colour scheme exactly. I like the touch of earthy brown.

That wave pattern would make a beautiful rug.

Is this the Kaffe Fassett pillow? It is one of my favorit pillows, but unfortunately I can´t do tapestry, which is espacially sad because I own the book for many years and always again when I am leafing it through I am in love with this pansy cushion. Hope you will finish it,
with my very best wishes,
Suzi
And no, I don´t think that it looks oldfashioned in a bad way, just charming and lovely.

Hi, Just blog hopping. I stayed a while to view your beautiful blog.
Love from Mum
xx