Getting Back To Normal.

I'm late this year, and it's not been because I've been whooping it up and partying on down for the last two weeks. Christmas was lovely, then just before New Year I got walloped by a dose of the flu and a chest infection and spent six days in bed without eating. Antibiotics are now working their magic. Now that my appetite is back I'm trying not to binge and put all the weight I lost back on. Yes, I guess this year's resolution (that I probably share with many) is to lose a few pounds, OK a stone at least! 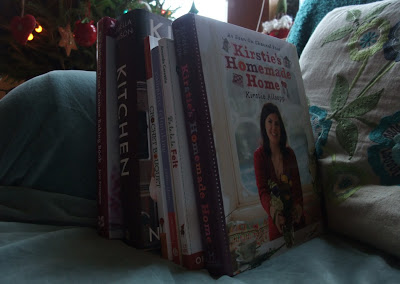 I was lucky to receive lots of nice books for Christmas. I'd already started to read (and admire the lovely pictures from) the Kirstie Allsop one which I was enjoying, the rest are as yet almost completely untouched - in some ways the best state as they still promise so much and have not had a chance yet to disappoint! 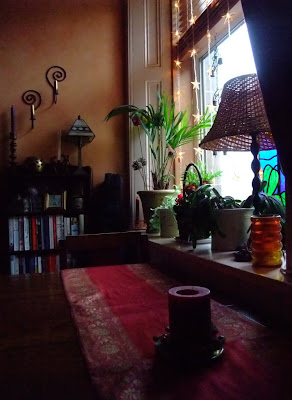 Another resolution this year is to have a good old clear out of the house. Even for me the clutter is becoming too much. It's free listing on ebay this weekend, I'll try and get organised... 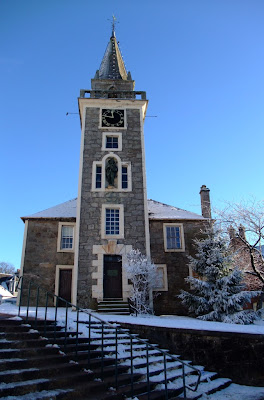 This photo is from a walk I took round the village just after Christmas, but it would look pretty much the same today as we had another light dusting of snow overnight... 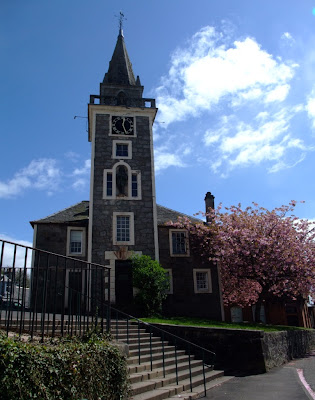 ...so only another five months to go till it looks like this (big sigh!). Maybe spring will come earlier this year.

Right, off to get my camera and try and photograph some things for ebay. Enjoy your weekend!

EDITED to say... was thinking about how long 5 months till the beginning of May seemed (when the photo with the cherry blossom was taken) and realised I'd made a mistake - it'll only be 4 months from now till the beginning of May, hooray! I'm feeling better already (just need to overcome the ongoing wheezieness and snottieness now...)
Posted by andamento at 13:48

Happy New Year to you too! I'm glad you a feeling better ~s ounds like you had a horrid few days. Nigella's Kitchen will not disappoint, as I got that too and it is jam packed with lots of yummy and easy things to make. I'm also trying to get lots of things organised to list on ebay ~ although I've only managed to list 5 things so far!! :O) xx

Happy New Year! I too have been laid low with bugs...don't think there are many who have escaped it, but yours sounds particularly nasty. Pleased you are feeling better. I was thinking the same thing about clearing out and didn't realise ebay was doing a freenie...mmmm I've got loads of books to get rid of but maybe will just list them on my blog and give them away x

So nice to see you back. I am glad to hear that you are getting better now. So many people seem to have been ill over Christmas and new year. I look forward to seeing your bike rides in 2011! x

Sorry to hear you have been poorly but glad to know you are on the mend. Happy New Year - keep cosy!

HAPPY NEW YEAR! So sorry to hear you've been unwell and I hope you are feeling much better and able to get out and about.
Books make such wonderful gifts as you can enjoy them over and over again. Have fun reading.
Anne

happy new year, sorry to hear you've been poorly. how lovely to have a stash of new books x

Glad to hear you are feeling better now , there has been so many bugs and germs going around lately I think everyone has been poorly. Nice books to keep you company though,

Poor you - had not realised you were ill. Hope you are back on your feet, and bike, soon! Much love, Louise

Sorry to hear you've been poorly.
Every other person seems to be going down with flu just now - think I might become a recluse for a while!

Poor you, hope you feel properly better soon. Hope the ebaying goes well. I always put it off for far too long and then dread having to photograph and describe everything - very worthwhile when it's done tho'.
Four months sounds a lot better than five - thankgoodness! Juliex

Happy New Year Anne. Sorry to hear about the wicked bug that got you in its clutches. We have been lucky so far but I am only whispering that in case I am overheard by an unkind fate.

I love that picture of the church. Gorgeous architecture. You have so many beautiful things to photograph nearby.

Happy New Year, glad you are feeling better. It really is the time for out with the old etc isn't it. I'd do a bit of sorting out myself but by the time I've looked at a few interiors type websites and blogs I'm exhausted.

Hope you're feeling better now, and that Ebay is good to you! 4 months to May, goodness, it's hard to imagine.

Hi Anne, I gave you an award! Check it out at my blog! Congratulations!

Hello, I have been awarded the stylish blogger award by Sewing Daisies. I would love it if you would now also like to have the award from me if you are happy accept it as I love reading your blog and seeing your creations. Rachael Xx

The longing for Spring really strikes this week, doesn't it!