Some not very good photographs of recent charity shop bargains. I do like a good old wander round the charity shops...

First up, a nice bright flower for A which is now wrapped round the foot of her bed. 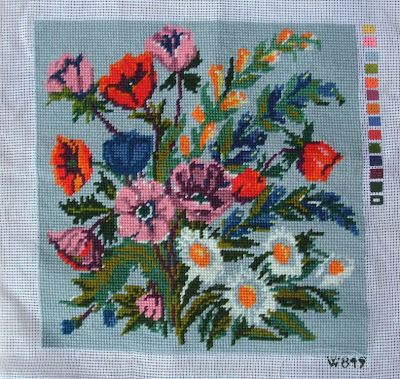 Next, a completed tapestry canvas which I'm going to make into a cushion cover. It will be a practice run in preparation for finishing off this one which I've yet to do despite my promise. I think I was a little scared to start it incase I messed it up - it did take me ten years to complete the needlework after all! The one above was in a bundle of things including A's flower, a cuddly toy and some books for £2.50. 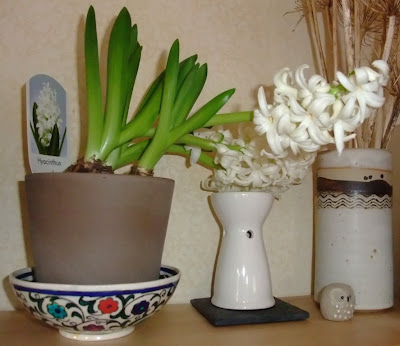 I took this photo to show the bowl that the hyacinth pot is in, then realised that everything in the photo (except the hyacinths & pot) originally came from charity shops. The hyacinths are now past their best and I need to remove them. They looked nice but were surprisingly scentless - perhaps a blessing as sometimes they pong just a little too much! 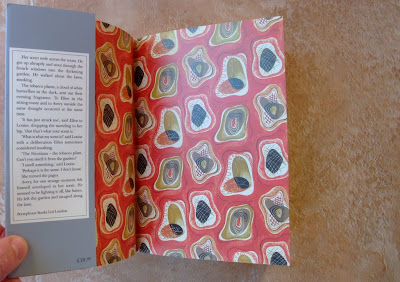 My first Persephone book: "Someone at a Distance" by Dorothy Whipple. I first heard about Persephone books via Jane Brocket's "Gentle Art of Domesticity" and Jane appears to be a huge fan of them . I've yet to start it, though at first impressions I am impressed with the physical quality of the book itself.

I'm currently slogging my way through this book. It's an easy read, it's only a slog in that it's not terribly exciting and though it's supposed to be amusing I can't say I've laughed out loud at it yet. I have the sequel which I'll read next then they're off to the charity shop themselves. 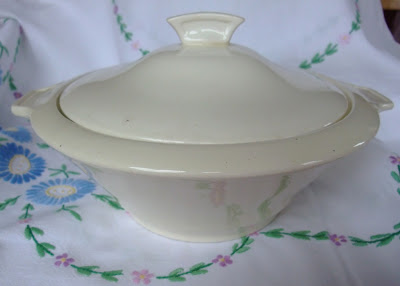 I liked the shape of this dish (£2). It'll be kept for best - I'll certainly not keep it in the cupboard with my other casserole dishes as a certain little person likes to raid the cuboards and we've already had some casualties. I may even use it for bulbs next winter. 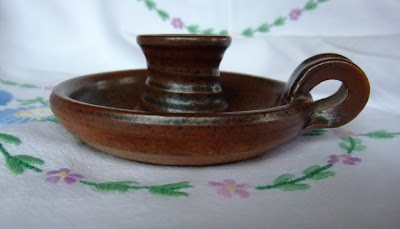 I'm a bit of a sucker for handmade pottery items, I need another candle holder like I need a hole in the head. It was, however, a mere 99p so I succumbed.

A close-up from the table cloth that the casserole dish and candle holder are sitting on. 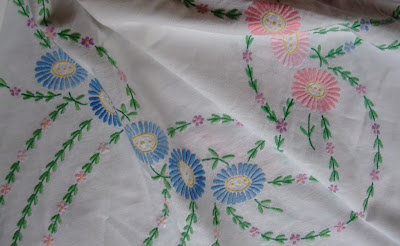 £1.75. It has a little stain in the middle which is good(!) as it means I can use it without worrying about spoiling it. 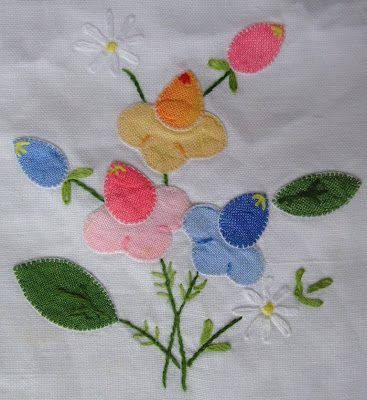 One of two appliqued tray cloths. 40p each. I don't need any more of these either! Ill find a use for it though I'm sure.

Off now to try and get some tidying up done. I do need to have a good clear-out as we're rather disappearing under piles of "stuff" (I wonder why!)
Posted by andamento at 12:43

What a haul! Cannot believe how cheap the embroidered stuff is. When you think of the hours of labour and the skill involved, it's tragic that it ends up in a charity shop. But then again, now it has found a new home and will be loved so it's not all bad. Louise

Just look at all the little treasures you found. That needlepoint will work up into something terrific, I'm sure.

Love all the goodies.

Nice treasures - my local charity shop has been a bit dull lately.