Making liquid soap from a bar and other odd activities.

The school holidays here are over! A is now back at nursery for her 2.5 hrs per day. For much of the week this coincides with N's nap, so I have some time to myself now during the day - hurray! I'm intending using it for mirror-making (must get on!) but today I'm blogging again...

The last day of the holidays (Mon) was lovely weather-wise. I even had my socks off again. We also had some more peacock butterflies in the garden, they're my favourite and I couldn't resist this photo shot of TWO AT ONCE! 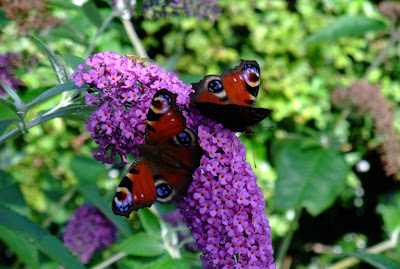 Since then, it has pretty much been raining non-stop - good baking weather perhaps. I did make some delicious crispy cakes... 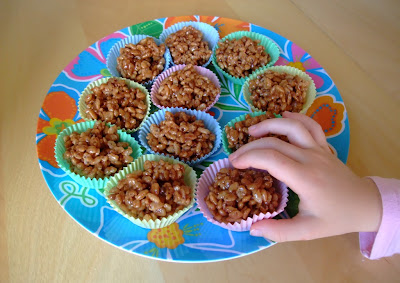 ... using a recipe recently obtained from a good friend (those & family recipes are the best kind!). I had actually been searching for the ideal crispy cake recipe and finally I've found it! The key ingredient, which raises it above the competition I think, is the golden syrup. Here's the recipe:

1. Melt the butter & golden syrup in a pan.
2. Melt the chocolate (I use the microwave)
3. Mix the melted ingredients together, add the krispies, mix again and spoon into cake cases pressing each one down a little so they stick together and don't fall apart when you attempt to eat them.

One of A's friends came over after nursery yesterday, I managed to amuse them both for a while by getting them to decorate some fairy cakes I'd made. Here are the results (some missing as they've already been devoured!). 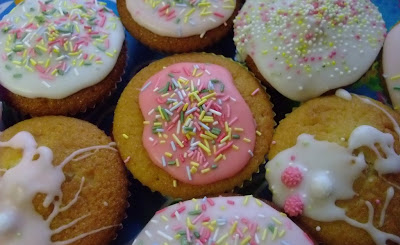 They look lovely, but they are somehow just a little too sweet for me. Given the choice I'd take the crispy cakes I have to say.

On Monday, I attempted to crochet for the first time (aside from a period of making mile-long crochet chains when aged about 9, I never learnt any other stitch at the time!). I was quite pleased with my first attempts at double crochet till I realised it looked nothing like the picture in the book. My next attempt, I now realise, resulted in a rib stitch. Third time lucky... 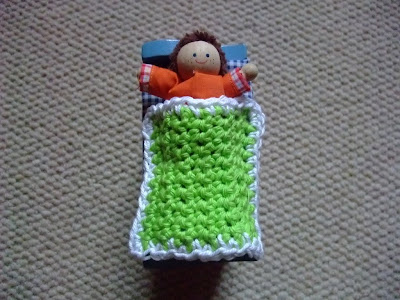 ...I think I've sussed it! The chap from A's doll's house seems pleased with it too.

Then I tried last night to find a simple granny square pattern. Oh, it really is as complicated as it all looks, I've so much to learn! I've some lovely yarns I want to use to make a cushion cover (no blankets for me - I know my limitations!)...

When I went out on my bike ride on Sunday I took along a tub to collect brambles in. I didn't actually find many, I ended up not looking as the ones I did see early on were not yet ripe. I did find some wild raspberries which were rather tasty. There were only a few of them, that made them all the more delicious! I'm keeping a eye on the bramble situation though... 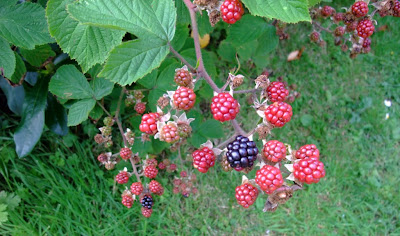 ...these are, ahem, in our garden, growing through the rhododendron bush at the top end (which is always the last part of the garden to get any attention, and it's got none at all this year!)

Another, completely unrelated, "thing" that I did earlier this week was to make liquid soap from a soap bar! Why on earth... (when I was half-way through the process I was rather wondering that myself!) Well, the reason I tried it was that I like Pear's soap as I like the smell. I don't however like soap bars as they make an awful mess and I'm not really too fond of cleaning sinks too often. I finally bought the liquid version of Pear's soap (it's quite expensive) and was soooo disappointed to discover it smells nothing like the bars, I'd just assumed it would. That's my reason. I've since discovered that in general liquid soaps contain a lot of additional chemicals so from an environmental, not to mention health, point of view are considered by many to be a BAD THING. Anyway, I thought I'd give it a go. I found a few recipes on the internet and plumped for a modified version of a microwave recipe I found.

IMPORTANT NOTES!
I used a 125g bar of soap, I had to add loads of extra water after the soap had melted as the mixture kept solidifying when it cooled. I ended up with masses of liquid soap (about 2 litres!) - I don't know how long it keeps for! If I were doing it again (which I probably would, the grating was the worst part, plus it made a bit of a mess but it was easy to clean up as it's only soap after all!) I would only use 1/2 bar of soap and would probably need only one or 2 extra cups of water.

As you can see, I didn't have nearly enough empty pump containers ready! We are using one of the soaps at the moment and it's fine. So (so far!) not bad for a 65p bar of soap and a little microwave power.
Posted by andamento at 13:42

Krispie cake recipe looks like a good one. Wow, I LOVE the soap recipe. I have had a big thing going on for a while now for soap and fairy liquid and sponges and all things squishy and bubbly so this looks like my next project. Did the Pears soap smell transfer successfully to the liquid version? And will it stay liquid in the pumps or begin to separate? Do you feel a bit like Nina and the Neurons?

Love the butterflies - ours are starting to dwindle in the garden now and have been replace by moths!!

I think your crochet looks grand and let's face it if I can do it anyone can - it's taken me a year of try, try and try some more!!

Have a lovely day,

The liquid soap does have the Pear's fragrance though not as strong. I find I need to use probably twice as much of it than normal liquid soap to get the same lather, but I'd still consider it a success, though it's early days yet!
Crispy cake recipe is a good one, thanks!
Wish I was as smiley as Nina (in Nina & the Nerons!)
Made a crochet flower last night so I'm getting there. Hand hurts today though!

Ros Badger's Homemade book has a nice pattern for granny squares, which is (apparently) very simple- I can't crochet so can't judge, but the results look lovely. The soap is an interesting idea - might have to try that.

Pomona - thank you so much for telling me that! I'd looked unsuccessfully in my three crochet books but hadn't thought to try Homemade. It'll be my next crochet project.